This article is using {{Card template}}.
See Help:Style guide/Card for how to edit this kind of article.
Edit this article
Small-Time Buccaneer
40608 • CFM_325
Regular 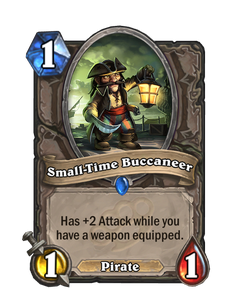 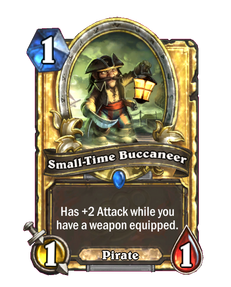 Dimensions: Full • 330 x 410px
Has +2 Attack while you have a weapon equipped.
Flavor text

"Oh, I'm not serious about it. I only pirate on the weekends." 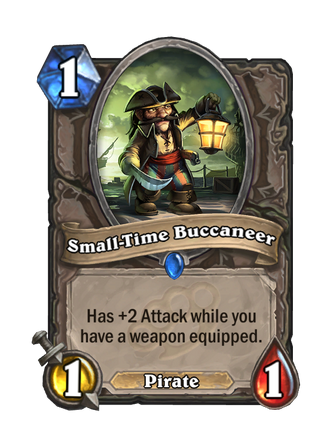 Small-Time Buccaneer is a rare neutral minion card, from the Mean Streets of Gadgetzan set.

An excellent one-drop for Rogues even if their deck is not Pirate-focused, who can use their Hero Power to boost the Small-Time Buccaneer into a 3/1.

Other classes should be using a Pirate tribal deck before playing this minion. Pirate Warrior is a very strong alternative, with multiple weapons and weapon-generating cards that activate the Small-Time Buccaneer's effect.

Southsea Deckhand, be careful not to miss damage by using up your last weapon charge, as the minion's bonus Attack effect will then deactivate.

Small Time Buccaneer is best played at turn 1 while going first. Since it is a pirate, it can summon Patches the Pirate . Due to its 1 health, most classes can remove Small-Time Buccaneer very easily for most classes on Turn 2 such as Mage, Druid, and Rogue Hero Powers as well as spells such as

Moonfire before you can get it to 3 attack.