This article is using {{Card template}}.
See Help:Style guide/Card for how to edit this kind of article.
Edit this article
Sludge Slurper
52422 • DAL_433
Regular 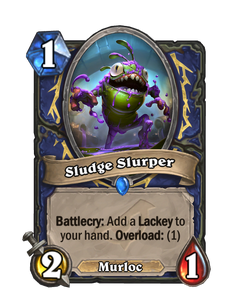 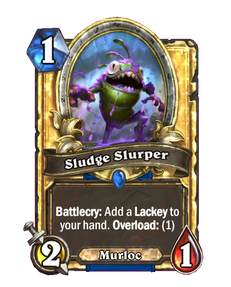 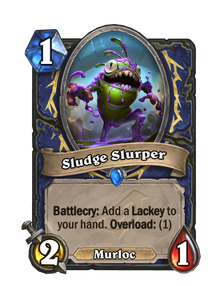 Sludge Slurper is a rare shaman minion card, from the Rise of Shadows set.

Sludge Slurper's Battlecry generates one of the following cards at random.

Sludge Slurper has greater stats than EVIL Cable Rat at a lower cost, but its drawback is Overload. When played on turn 1, the generated Lackey can be played on turn 2, as the Shaman will have only 1 Mana to work with on that turn. This works best with Faceless Lackey, Ethereal Lackey, and Draconic Lackey. If the opponent played a minion with 2 Health, Kobold Lackey can allow for a major board swing. If the Sludge Slurper survived, Titanic Lackey is also a good play. Witchy Lackey can be used, but is better saved for a larger minion.

Since Sludge Slurper is both a Murloc and a Battlecry (that generates other Battlecries), it fits perfectly in Murloc Shaman and Battlecry Shaman.