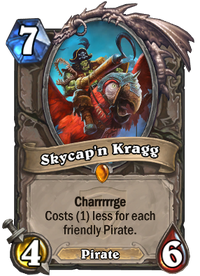 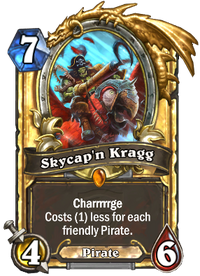 What's more boss than riding a parrot with a jawbone for a shoulderpad while wielding a giant hook-lance-thing and wearing a pirate hat? NOTHING.

Skycap'n Kragg is a legendary neutral minion card, from the Grand Tournament set.

Skycap'n Kragg can be obtained through The Grand Tournament card packs, or through crafting.

This card can serve as a finisher in a Pirate deck (similar to how Doomguard was a finisher for zoo decks). Best used when you have at least 3 Pirates on the board.

Skycap'n Kragg is an original Hearthstone character.[3] He is clearly an orc Pirate, and the Horde sigil on his mount's chest seems to proudly assert his loyalty to the faction.

Following his introduction in Hearthstone, Kragg would go on to appear in World of Warcraft with the Battle for Azeroth expansion, appearing as a boss in the Freehold dungeon.