This article is using {{Card template}}.
See Help:Style guide/Card for how to edit this kind of article.
Edit this article
Skull of Gul'dan
58201 • BT_601
Regular 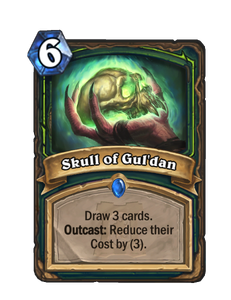 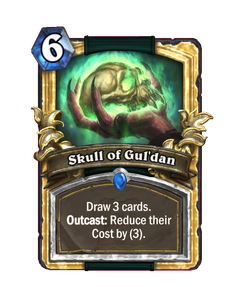 A fellow of evil possessed, of most devious shadow. He hath turned on his kin a thousand times, and now, how abhorred in all imagination he is! Skull of Gul'dan is a rare demon hunter spell card, from the Ashes of Outland set.

With the Outcast active, Skull of Gul'dan is a powerful refueling tool that reduces the cost of all cards drawn by a significant amount. However, its high mana cost makes it awkward to play, since it may be drawn too early and get stuck in your hand. If Skull of Gul'dan is too deep in your hand, it can be difficult to play cards to unbury it and pay the 6 mana on the same turn. This adds inherent risks to this powerful effect.

To make the most of the effect, your deck should largely consist of cards that cost 3 or more. Otherwise, the mana reduction has a chance of being wasted.

Played without the Outcast, Skull of Gul'dan is still an efficient source of card draw, if not a bit boring.

The Skull of Gul'dan was a powerful demonic artifact created from the skull of the orc warlock Gul'dan. Used for a plethora of demonic activity, from opening portals to corrupting the northern forests of Ashenvale, its powers were finally consumed by Illidan Stormrage. Although already consumed by Illidan, the skull still holds power and is in Illidan's possession.