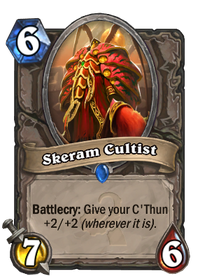 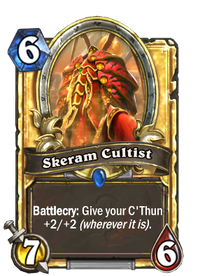 Just before he comes into play, there is an AWESOME training montage with C'thun.

Skeram Cultist is a rare neutral minion card, from the Whispers of the Old Gods set.

Skeram Cultist can be obtained through Whispers of the Old Gods card packs, or through crafting.

Despite granting C'thun a decent buff, this is one of the weaker C'thun minions. It has slightly worse stats than Boulderfist Ogre, and aside from a small C'thun buff, lacks any abilities once it enters play. There are a few better alternatives, such as Crazed Worshipper, who has Taunt and the ability to buff C'thun multiple times for one less mana, or Doomcaller, who provides a better body, the same kind of buff, and a very powerful ability for only two more mana.

Summon
The Sleeper has awoken!

Skeram Cultist appears to be a member of the cult led by Prophet Skeram. Skeram and his cult are qiraji, a race of creatures created by C'Thun.

The Prophet Skeram is an important religious leader in Ahn'Qiraj, and author of The Prophecy of C'Thun. He is the first boss found in the Temple of Ahn'Qiraj, and must be defeated for access to the rest of the zone.