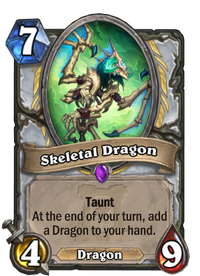 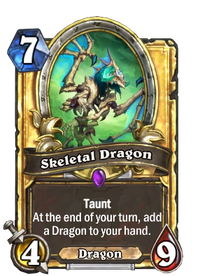 Taunt At the end of your turn, add a Dragon to your hand.

I wish to complain about this dragon what I purchased not half an hour ago from this very boutique.

Skeletal Dragon is an epic priest minion card, from the Ashes of Outland set.

Skeletal Dragon provides Taunt on a decent 9-health body, and a free dragon in your hand each turn it remains in play. Its attack is somewhat low for a 7-mana minion, but it is protected from both Shadow Word: Pain and Shadow Word: Death in Priest mirrors.

If you can stick Skeletal Dragon for one turn, it's one of the best Psyche Split targets Priest has available. Alternatively, you can cast both together on the same turn with reductions from Fate Weaver or Emperor Thaurissan. You can also use cheaper copying cards like Vivid Nightmare or Gift of Luminance, although this misses out on Skeletal Dragon's high health.

Be careful using Skeletal Dragon in a deck with lots of ways to generate cards, like a Galakrond deck or decks focused on Sethekk Veilweaver. Dragons tend to be very expensive and often draw or generate more cards, which can clog up your hand. Without careful hand management, you may be forced to lose value or suffer overdraw.

Skeletal Dragon is most likely a Fel dragon due to the Burning Crusade theme of the expansion.

Fel dragons are a type of fel-inflicted skeleton dragon raised by a demon's blood that seeps to the body of the corpse.

Skeletal Dragon may also be to be a frost wyrm.

Frost wyrms, also known as frostwyrms, are the skeletal remains of adult blue dragons killed by the Scourge. These reanimated vessels of destruction do not fear death; they dispense it.

In ages past, venerable dragons nearing death flew to the land of Northrend to die. To this day there are entire dragon graveyards littered with massive petrified bones and skulls. When Ner'zhul, the Lich King, took control of Northrend, he used his powerful magics to raise the ancient dragon skeletons from the dead. These skeletal dragons radiate cold power and think of nothing other than serving their dark master.

The only creature resembling a frost wyrm in Outland is the undead dragon Teribus the Cursed, who flies over the Bone Wastes in Terokkar Forest.