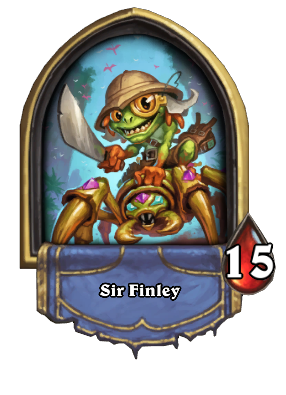 Sir Finley rides into battle, ready to dispense justice against his final foe.

Sir Finley is a hero that the player can pick in a Tombs of Terror run. He represents the dual class of Paladin and Shaman. 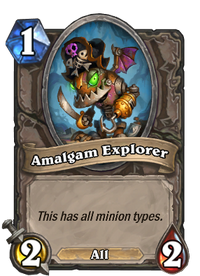 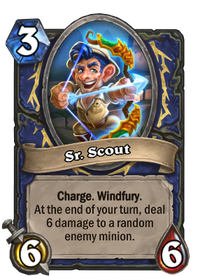 I’m off then! Perhaps I shall build up my trophy collection while out and about?

One must never underestimate a murloc armed with… panache.

I shall vary my tactics as I learn more about our foes.

Right, then. We shall fight our way to those dastardly Plague Lords!

Are these foes getting stronger? Hmmm. Quite.

Oh I say, adventuring can be quite lucrative.

Now, to flesh out my strategy! Paladin by trade, shaman by nature.

How delightful! A friendly place to mingle and adjust my minions.

Oh bother! I shall have to begin again.

Friendly Encounters
Enough fighting. Time for a spot of tea with friends.
I say, that's a… pop-up… tavern? Right!
How delightful! I shall endeavor to "network" as they say.
Turn 1 on first boss in Chapter 1

Sir Finley
Water… Oh! I shall go mad with thirst!
Reno Jackson
Hang in there little buddy! Don't go mad... until we find the Plague Lord of madness!

Sir Finley
A-hem. So we’re hunting a plague of… death? Is it?
Brann Bronzebeard
Oh aye. Ancient tombs, a plague of death – this is real wrath o’ the Titans stuff!

Sir Finley
Titan Keepers who shaped Azeroth once walked these halls!
Brann Bronzebeard
Aye. And there are devices in here that can re-shape Azeroth… fer the worse!

E-GADS! Look at the size of that thing! How can we beat this?

By the Light, indeed!

Thanks for the assist, chums.

My faithful steed! We ride into battle!

A noble knight needs a brilliant weapon, after all.

Even I was but a squire once!

Glad to have you by our side, noble knight!

To battle, my be-scaled allies!

A fine tea set. For the gentlemen-adventurer.

Unused
Gather us together, fine. But there's no need to go plaguing about!
Do not make me move my monocle to the opposite eye in an unambivalent show of aggression!
That will be quite enough finger-pointing.