This article is using {{Card template}}.
See Help:Style guide/Card for how to edit this kind of article.
Edit this article
Sinister Strike
710 • CS2_075
Regular 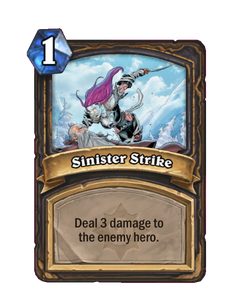 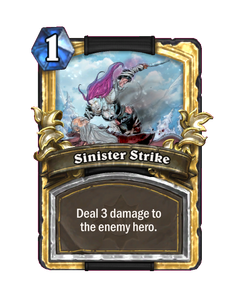 There's something about this strike that just feels off. Sinister, even. 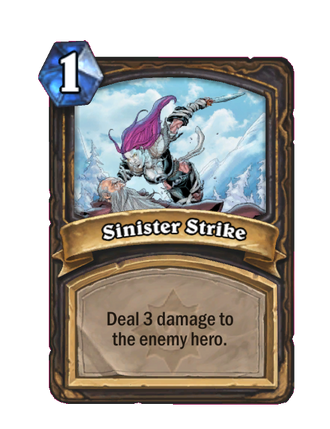 Sinister Strike is a rogue spell card, inducted into the Legacy set, formerly from the Basic set. 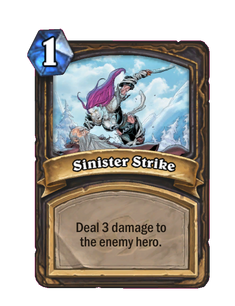 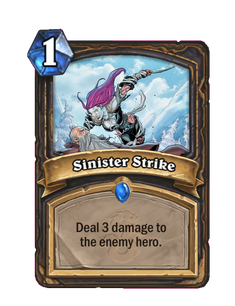 Regular and golden Sinister Strike are uncraftable and cannot be crafted or disenchanted.

Sinister Strike are obtained for raising rogue to level 7.

Sinister Strike (Core) is uncraftable and cannot be crafted or disenchanted.

Sinister Strike allows you to trade card advantage to deal extra damage to your opponent. With a low mana cost of 1, it can be an effective tool for ending the game in the later game by starting the execution of a lethal combo but is a poor choice to play early in the game as it can only target your opponent's hero.

Sinister Strike is most useful in combination with

Malygos can also turn it into a devastating 8 damage for just 1 mana, enabling you to play one Sinister Strike in the same turn. Outside of these combos it is generally a poor card, due to its low value.

"It adds injury to insult."

Sinister Strike is a basic rogue ability from World of Warcraft which consumes a large amount of energy to deal a substantial amount of direct damage.