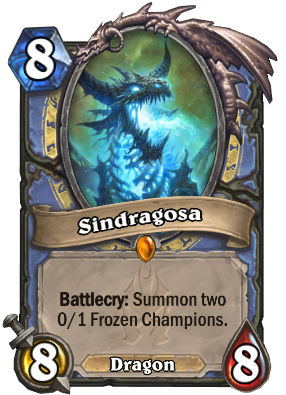 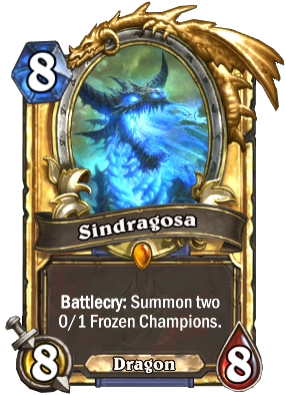 "I recognize your effort but I think your magic still has room for improvement." - Sindragosa after taking a class on giving constructive feedback.

Sindragosa is a legendary mage minion card, from the Knights of the Frozen Throne set.

Sindragosa can be obtained through Knights of the Frozen Throne card packs, or through crafting. 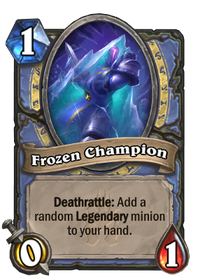 This card has decent stats for its cost, but its real value comes from the Frozen Champions. However, without any support, the simplest way to destroy your Frozen Champions is to use Fireblast, but this can only be done once per turn and spends 2 mana. A more efficient way to destroy them is by giving them Taunt or Attack with cards like Defender of Argus, Fungalmancer, or Stormwind Champion, or playing a card that deals damage to the entire board like Volcanic Potion, Primordial Drake, or even Deathwing.

With Frost Lich Jaina the Frozen Champions can function as soft taunts, as they give an easy way to use Icy Touch to summon a Water Elemental.

"You are fools to have come to this place! The icy winds of Northrend will consume your souls!"

Sindragosa, formerly the prime consort of Malygos and Queen of the Blue Dragonflight up until her death and wounded by Deathwing during the War of the Ancients, was a mighty frost wyrm raised by the Lich King himself to serve as the queen of the Frostbrood. She was ultimately defeated by a group of adventurers in Icecrown Citadel.

Long before the Great Sundering, Sindragosa was the beloved consort of Malygos, Aspect of the blue dragonflight and guardian of all arcane magic. During the War of the Ancients, Neltharion the Earth Warder, Aspect of the black flight, convinced his dragon brethren to empower a powerful artifact called the Dragon Soul, claiming that it would thwart the impeding invasion of the demonic Burning Legion. However, Neltharion betrayed his dragon allies during the Legion's assault, provoking an apocalyptic battle in the skies over the Well of Eternity. Malygos and Sindragosa joined the blue dragons in surrounding the Earth Warder and charged the black dragon. However, Neltharion used the might of the the Dragon Soul to strike out, decimating nearly all of the blue dragonflight. The blast mortally wounded Sindragosa and hurled her far across the land, deep into the frozen north.

Blinded and near death, Sindragosa sought desperately to reach the Dragonblight — the place where dragons instinctively travel to die. Weakened and no longer able to fly, Sindragosa plummeted to the cold earth in the peaks of Icecrown. The blue dragon gathered what remained of her energy and called out to Malygos for aid. Her only answer was the howling arctic wind as she struggled on, but the distance was far too great; agonizingly, she realized that her spirit would not find rest within the Dragonblight. Her life continued to fade away as her sanity deteriorated. In the midst of her delirium, Sindragosa's final thoughts turned to bitterness and hatred: hatred against the Legion, hatred against Neltharion, hatred even against Malygos. But most of all, hatred against the world of mortals. And in her dying moments, Sindragosa vowed revenge.

Thousands of years later, Arthas Menethil, the Lich King, awoke from his long dormancy and journeyed to Sindragosa's Fall, where he raised Sindragosa into undeath as a mighty skeletal frost wyrm and ordered her to lead the Frostbrood into war. The Lich King tore the spirits of Sindragosa's lost whelps into undeath in front of her skeletal form as a final affront to the great dragon. Arthas was known to use Sindragosa as a mount.

Sindragosa briefly appears in the Pit of Saron after the defeat of Scourgelord Tyrannus. While the leader of the army of liberated slaves (Martin Victus for the Alliance, Gorkun Ironskull for the Horde) commends the adventurers for their bravery, Sindragosa rises up from the pit behind them and unleashes her fury, killing the leader and their army. The adventurers are pulled back to the entrance tunnel by Jaina Proudmoore or Sylvanas Windrunner at the last second, saving them from a grisly death.

Sindragosa later retreated to her lair in the Frostwing Halls of Icecrown Citadel, where she continued to strengthen her brood with the help of Ymirheim's vrykul. After Valithria Dreamwalker was rescued by adventurers, she gave the heroes verdant life crystals to use during their battle with Sindragosa. Valithria instructed the champions to battle the Frost Queen until she was weakened, and then use the crystals to coax out the essence that was dormant within her. Similarly, Darion Mograine instructed would-be wielders of Shadowmourne to grant Shadow's Edge its final infusion of power by subjecting themselves to four of Sindragosa's frozen breath attacks before ultimately destroying her. Sindragosa was finally defeated by adventurers in Icecrown Citadel, and her crystalline essence was brought to Kalecgos at Wyrmrest Temple. Upon receiving the essence, Kalec stated "So much suffering, so much needless destruction. These have not been kind times for my brothers and sisters. But thanks to your efforts, brave adventurers, this darkened yet still noble soul may find peace at last. Rest now, Sindragosa. You are home...."