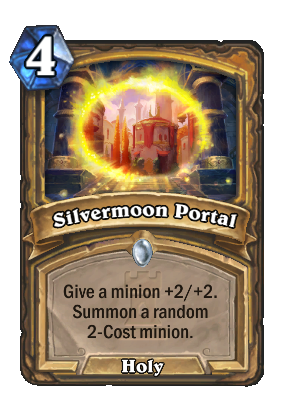 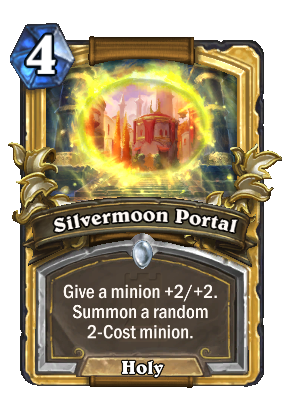 Silvermoon Portal is a common paladin spell card, from the One Night in Karazhan set.

Two copies of regular Silvermoon Portal are obtained by completing the paladin Class Challenge in One Night in Karazhan, unlocked upon completing second wing, The Opera.

As a Wild format card, both regular and golden versions of Silvermoon Portal can also be crafted for the following amounts: 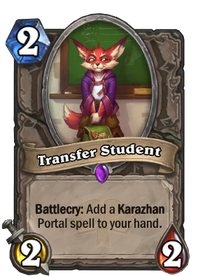 Although not the best possible spell, (consider Mark of the Wild + a 2-cost minion), the random 2-cost minion summoned creates a lot of chances. From an unlucky Ancient Watcher when your deck has no Silences, to a Millhouse Manastorm without the Battlecry activating, or even a lucky Totem Golem, the possibilities are endless.

This card works really well with Sword of Justice and even more with Righteous Cause.

You can use it on control decks for a buff plus a minion or a tempo oriented decks, since you can play it on cards like Fjola Lightbane, Eydis Darkbane, Djinni of Zephyrs, Dragonkin Sorcerer, since they got extra effects when targeted by your cards. For example, if you play it on The Voraxx, it will replay it on its plants and the Djinni will replay the spell on himself.

When Lynessa Sunsorrow replays the Portal, she will summon the random minion, still counting for Righteous Cause but not for The Last Kaleidosaur. While Brann Bronzebeard is active, her Battlecry will be replayed, therefore, she will summon additional minions.

Paragon of Light makes a good combination too. As she gets the Taunt, you will have an additional minion for trades.

Brazen Zealot got another good synergy, because the additional summon counts for her bonus attack.

The below table lists all 2-cost collectible minions in Standard format, representing the range of possible minions summoned by Silvermoon Portal.

Portals are a line of useful Mage utility spells that allow the caster to transport themselves and their party members to one of several fixed locations (including all friendly capital cities). In World of Warcraft, Horde mages can open portals directly to Silvermoon City.

Silvermoon City is the capital of the blood elves. The home of the Sunwell and the Blood Knight order lead by Lady Liadrin, the paladin opening the portal appears to use it to gain a clearer connection to the Light.

The crown jewel of the blood elves is their capital of Silvermoon City (aka Silvermoon), nestled in the Eversong Woods in their ancestral lands of Quel'Thalas. At the northernmost tip of the Eastern Kingdoms the beauty of the spires and thoroughfares of Silvermoon stand in stark contrast to the Dead Scar, the tainted path that Arthas tore through the city in his quest for power. Though nearly destroyed by Arthas' attack on the Sunwell, Silvermoon is once again a thriving city. Most recently, the rebirth of the Sunwell has lifted spirits among the elves, and they have continued to heal Silvermoon's scars in the hopes of returning their beloved capital to its former glory.