This article is using {{Card template}}.
See Help:Style guide/Card for how to edit this kind of article.
Edit this article
Silverback Patriarch
67 • CS2_127
Regular 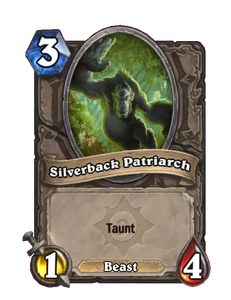 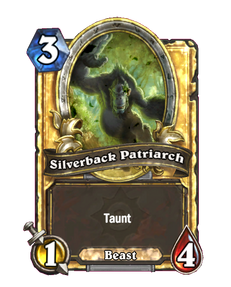 He likes to act like he's in charge, but the silverback matriarch actually runs things. 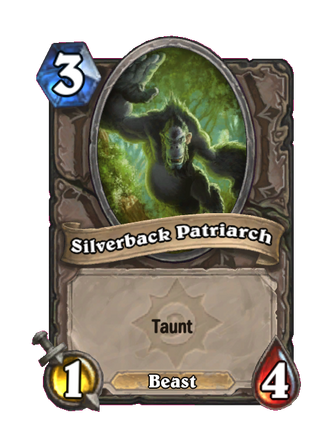 Silverback Patriarch is a neutral minion card, inducted into the Legacy set, formerly from the Basic set. 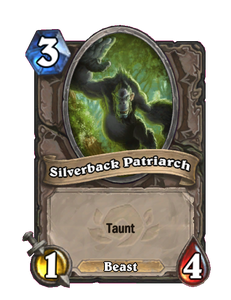 Regular and golden Silverback Patriarch are uncraftable and cannot be crafted or disenchanted.

Silverback Patriarch is generally considered an overcosted/understatted card, with very little potential despite its Beast type. New players may find this card of use if building an early game Taunt-heavy deck, but it is otherwise not recommended; even in those decks,

Ironfur Grizzly is a stronger option, with a better statline and retaining the Beast tag.

As a Beast, it has synergy with Hunter cards such as

Scavenging Hyena. There is also some potential synergy with Druid cards like

Knight of the Wild.

Silverback Patriarch has multiple stronger alternatives. Although some of them lack the Beast tag, generally this is a minor upside at best.

Silverback Patriarchs are level 42-43 gorillas native to Stranglethorn Vale. They can be found northeast of Booty Bay, near the eastern shore of the peninsula.