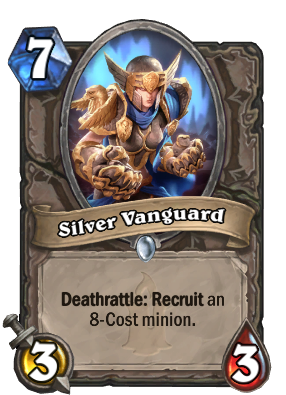 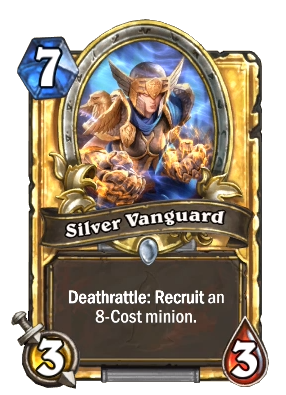 Silver Vanguard is a common neutral minion card, from the Kobolds & Catacombs set.

Silver Vanguard can be obtained by:

While Silver Vanguard's stats are pitiful for its cost, it has an enormously powerful Deathrattle, allowing it to Recruit an 8-Cost minion. When including Silver Vanguard in your deck, you want to make sure you include 8-Cost minions that would benefit from being summoned straight from the deck; while minions with a positive Battlecry like Tortollan Primalist and Kalimos, Primal Lord would decrease in value, those with persistent effects such as The Lich King and Rotface, or even those with negative Battlecries like Charged Devilsaur would be more beneficial. Be wary of Silence effects, as they will render Silver Vanguard nearly worthless. Spiritsinger Umbra and N'Zoth, the Corruptor synergize fantastically with her.

Silver Vanguard can be used to create a nearly infinite loop with Da Undatakah. If Da Undatakah is given the Deathrattles of Immortal Prelate and this card and you have two copies, it will repeatedly resummon itself until there are no more copies processing death sequence. This can be used to generate huge amounts of armor with Plated Beetle or/and deal high damage to your opponent with Leper Gnome.