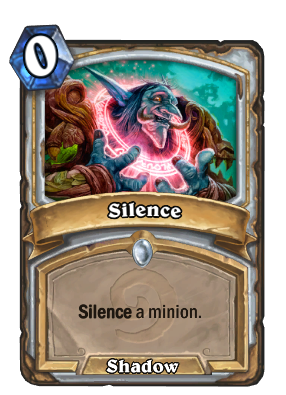 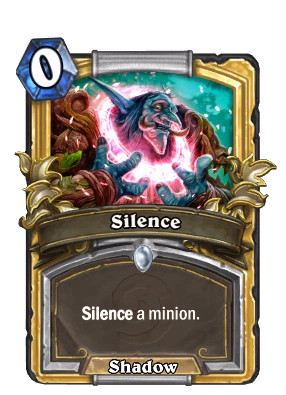 Reserved for enemy spellcasters, evil liches from beyond the grave, and karaoke nights at the Grim Guzzler.

For the ability of the same name, see Silence (ability)

Silence is a common priest spell card, inducted into the Legacy set, formerly from the Classic set. 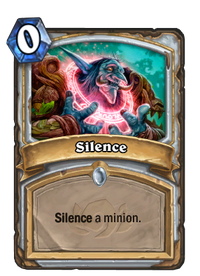 Silence (card) can be obtained through Classic card packs, or through crafting.

The Silence effect is a powerful effect that can render your opponent's minions useless. Silence will cancel the target's abilities such as Taunt and all effects that have been cast upon it. Silencing a minion that has a Battlecry will not remove its effect from the field, but silencing a minion who has received a battlecry will remove the buff. Silence helps players control another player's minion from getting out of control either through its effect or through buffs applied to it. A simple silence can effectively shut down all buffs given to the minion or effects that the minion had.

Silence can also be used on your own minions if they are negative, such as Venture Co. Mercenary.

Silence will not cancel passive buffs provided by another minion's ongoing effect, such as Raid Leader's Attack bonus, however silencing the generating minion will remove the effect from all affected minions.

Silence is a Shadow priest ability from World of Warcraft. A powerful tool for countering spell-casters, it is a vital part of the Shadow priest's arsenal of crowd control abilities that prevents the target from using any spells for several seconds. This can be useful for interrupting devastating DPS nukes, but is most critically used to prevent healers from assisting their teammates, buying time for the priest and their allies to finish a target without interruption.