This article is using {{Card template}}.
See Help:Style guide/Card for how to edit this kind of article.
Edit this article
Sightless Watcher
56973 • BT_323
Regular 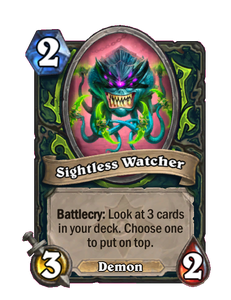 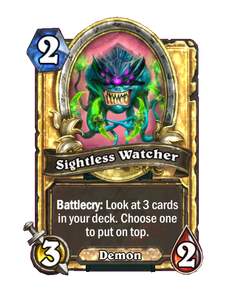 What he lacks in sight, he makes up for in sleight-of-tentacle tricks. 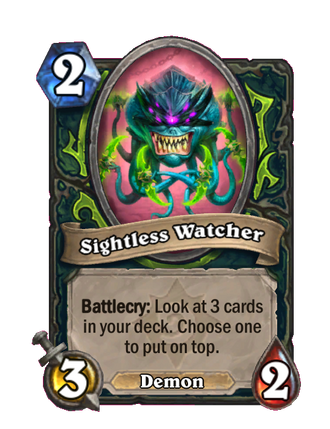 Sightless Watcher is a demon hunter minion card, inducted into the Legacy set, formerly from the Basic set. 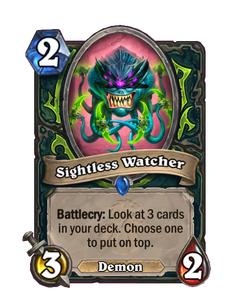 Regular and golden Sightless Watcher are uncraftable and cannot be crafted or disenchanted.

Sightless Watcher are obtained for raising demon hunter to level 6.

Sightless Watcher (Core) is uncraftable and cannot be crafted or disenchanted.

The turn Sightless Watcher is played, it's effectively a

Bloodfen Raptor. However, it allows you to set up your next draw, giving you the best of three options to fill your mana curve. In a sense, it's a

Tracking that doesn't discard the other options and comes with a 3/2 Demon, but also is much slower.

Sightless Watcher is great for setting up Outcast cards, ensuring they're the next card if you have the mana to play them, or guaranteeing you'll draw something else if you know you won't be able to play it next turn.

This minion can also help fetch specific cards. If you're against an aggressive deck and you know you'll need a board clear soon, you can ensure your next card is something like

Soul Cleave. If you're looking for a finisher, Sightless Watcher can grab an

Inner Demon. It's also good for helping you get key cards on curve like an

Imprisoned Antaen or prevent key cards from being drawn, like your spells in a

Beware of cards with Shuffle into deck effect, such as

Bad Luck Albatross. When any card is shuffled into your deck, your deck is also randomly shuffled, effectively countering the Battlecry which you have used before. For instance, if there is a Bad Luck Albatross in your opponent's board, remember to destroy it before you play Sightless Watcher.

Sightless Watcher is an observer who has recently become a demon hunter. While most demon hunters have to sacrifice both of their eyes, this observer had to sacrifice all seven. On the upside, he also got six warglaives.[1]

Observers (or floating eyes) are an intelligent race of floating eyeball squids native to the Great Dark Beyond.

A mob named Sightless Watcher appears in World of Warcraft, but it's an inquisitor rather than an observer.