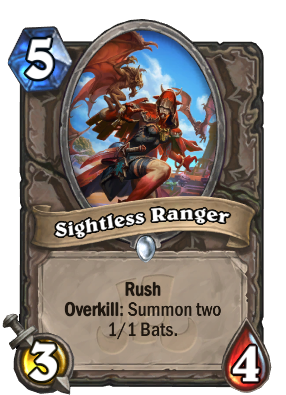 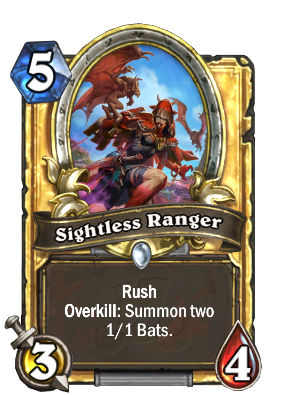 An eye for sore sights.

Sightless Strategist is a common neutral minion card, from the Rastakhan's Rumble set.

Sightless Ranger can be obtained through Rastakhan's Rumble card packs, or through crafting. 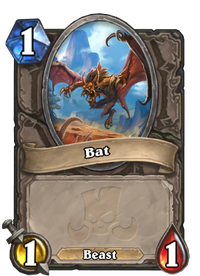 Sightless Ranger is most comparable to Grim Necromancer, as a way to generate 1/1 minions out on the board. The Rush mechanic helps you control the board and can ensure that you acquire the bats.

The bats can be used to manipulate the health of opposing minions, setting up another successful Overkill. Their Beast tag is useful in Hunter decks, which can use abilities such as Scavenging Hyena, Spirit of the Lynx and Starving Buzzard to get extra value out of them.

Sightless Ranger is a blood troll.

Blood trolls are an ancient troll subspecies that inhabit the swamp of Nazmir on Zandalar and worship the blood god G'huun. They use blood magic, which corrupts the creatures around them and turns them into blood beasts.

The blood trolls of Nazmir are the monsters that haunt every Zandalari troll child's nightmares, and for good reason. They have been called the "bogeymen" of trolls; in the Zandalari capital of Zuldazar, stories are passed down from generation to generation cautioning children to behave, lest Nazmir's twisted practioners of blood magic come to snatch them from their beds, and those who dare brave the swamp have a habit of disappearing, never to return.