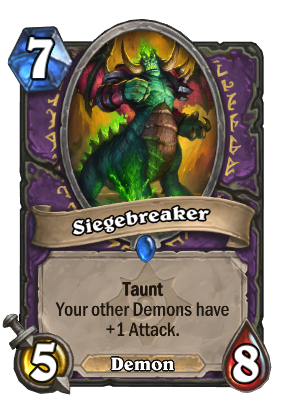 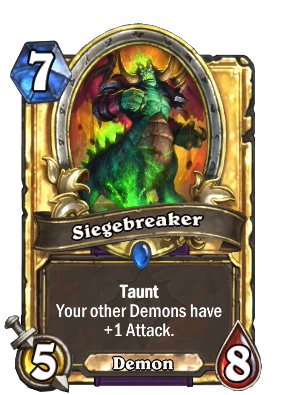 Has a side hustle as a siegebroker.

Siegebreaker is a rare warlock minion card, inducted into the Legacy set, formerly from the Classic set.

Siegebreaker can be obtained through crafting only.

Siegebreaker can be used in any deck but is especially effective in Zoolock. By stats it's already a big minion which makes it hard to clear board for your opponent while also giving your other Demons +1 Attack, making them more dangerous. This can force your opponent to use their board clears very early, making your board harder to clear the longer the game goes. Its high health value also makes it a very good counter against other Zoolock's and a decent counter against aggro decks.

Siegebreaker is a pit lord.

The Pit Lords who serve under Mannoroth the Destructor are some of the most cruel, barbarous butchers to ever roam the trackless wastes of the Twisting Nether. These hulking engines of hate and death love only to kill and bring sorrow to all living creatures. Fanatically loyal to Mannoroth, the pit lords will stop at nothing to see the will of the Legion upheld. These massive demons take sadistic pleasure from instilling crazed terror, and then slaughtering their enemies.