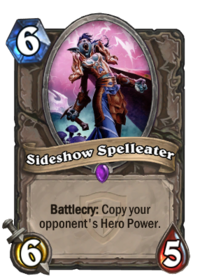 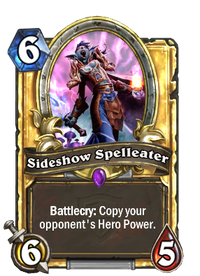 Sideshow Spelleater is an epic neutral minion card, from the Grand Tournament set.

Sideshow Spelleater can be obtained through The Grand Tournament card packs, or through crafting.

Sideshow Spelleater can work well for rogue or druid, since their Hero Powers are not that useful in the later stages of the game.

You can copy upgraded Hero Powers from Quest such as Obelisk's Eye , Tome of Origination, and etc or even upgraded Hero Power from Justicar Trueheart or Baku the Mooneater, or for fun, The Amazing Reno's What Does This Do? to have both player's utilizing RNG instead. Copying Hero Power replacements such as INFERNO! or DIE, INSECT! can be devastating for your enemies.

You can use Sideshow Spelleater to permanently change your opponent's hero power by first playing Grizzled Wizard, then copying the swapped hero power.