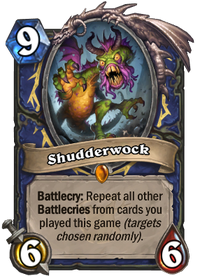 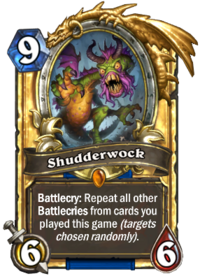 Battlecry: Repeat all other Battlecries from cards you played this game (targets chosen randomly).
Flavor text

Beware the Shudderwock, my son. We're fresh out of vorpal daggers.

For the boss of the same name, see Shudderwock (boss)

Shudderwock is a legendary shaman minion card, from the The Witchwood set.

Shudderwock can be obtained through The Witchwood card packs, or through crafting.

Shudderwock is a powerful value play that requires specific deckbuilding. In order to reach late game to have drawn and played Shudderwock, the deck needs a strong Control backbone. Shaman has access to several powerful control options, such as Volcano and Lightning Storm. Strong Battlecries to copy include Elise the Trailblazer, Hagatha the Witch, Kalimos, Primal Lord, Baleful Banker, and Zola the Gorgon. Shudderwock is fairly weak with targeted Battlecries like Hot Spring Guardian and Fire Elemental, since it leaves these effects up to chance.

Like all combo decks, decks focusing on Shudderwock are vulnerable to Aggro and Tempo, which can defeat them before Shudderwock is properly set up.

Shudderwock is unique to Hearthstone.

The earliest mentions of this bizarre entity were recorded in nonsensical children’s rhymes. As a result, initial reports of the Shudderwock in the woods were dismissed as the hysterical prattle of an unhinged mind. The poor soul was indeed unhinged, but the Shudderwock lurking in the Witchwood is nonetheless terrifyingly real.

Our arcanists are as puzzled by this entity as they are by Baku the Mooneater. Like Baku, Shudderwock is unique to the Witchwood, and seems to exist somewhere on the edge of reality, defying easy description as well as physical and arcane laws. In fact, it is unclear if this creature is “real” in the way that one generally uses the word, though it certainly exists. Was it always so, or is the Shudderwock yet another testament to Hagatha’s power?

Speculations as to its nature are immaterial; we would be wise to heed the oft-repeated warning to beware the Shudderwock! It is incredibly dangerous, warping reality wherever it walks, leaving those who meet it jabbering wrecks, pale shadows broken by darkest hex. They fail to understand they are out of time, when their speech begins to rhyme. Can they recover from this diminished state? Being devoured would be a kinder fate.

(Note: It seems that there was supposed to be more in this report, but it ends abruptly mid-page. Nor have we had further contact with this agent after the report was delivered. Curiouser and curiouser…)[4]

At best guess, the Shudderwock was a green dragon before Hagatha got her claws into him.[5]