This article is using {{Card template}}.
See Help:Style guide/Card for how to edit this kind of article.
Edit this article
Shrinkmeister
1936 • GVG_011
Regular 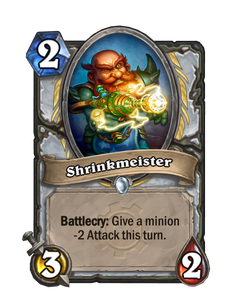 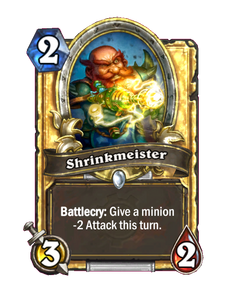 After the debacle of the Gnomish World Enlarger, gnomes are wary of size-changing inventions. 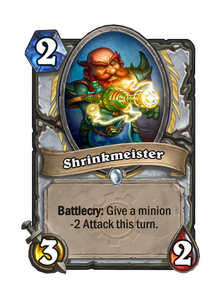 Shrinkmeister is a common priest minion card, from the Goblins vs Gnomes set.

In terms of trading its effect can be considered as +2 Health to the attacking minion, potentially allowing you to trade 2 for 1 and keep field advantage. This can be especially useful when using multiple minions to attack the same minion, with the benefit essentially multiplied by the number of targets suffering the affected minion's Attack that turn. For example, a Priest might use a Big Game Hunter, a Knife Juggler and an Ironbeak Owl to attack a Deathlord, in the process destroying all three attacking minions. By first using the Shrinkmeister, the Deathlord's Attack would be reduced to 0, allowing all three attacking minions to survive, while the Deathlord would still be destroyed.

In addition to this, Shrinkmeister can be used to gain additional card draw when using Holy Nova or Circle of Healing with Northshire Cleric, by allowing your minions to survive attacking enemy minions they would otherwise die, allowing you to heal them afterwards. For example, a Priest might have a Shadowboxer, a Northshire Cleric and an Evil Heckler on the board while the opponent has a Chillwind Yeti. While a Shrinkmeister allows the Evil Heckler to survive killing the Yeti by itself, the Priest could attack the Yeti with both the Shadowboxer and the Cleric first, damaging them, then allowing significant card draw after using Circle of Healing.

Very useful if you want to use Shadow Word: Pain on a minion with 4 or 5 Attack. This card increases the utility of Shadow Word: Pain and in combination with Shadow Word: Death gives the priest a removal solution for minions of any Attack. Shrinkmeister works with numerous effects which are dependent on specific Attack values. For example it can allow you to steal an opponent's 4-5 Attack minion with Shadow Madness, or 3-4 Attack minion with Cabal Shadow Priest; or to destroy a 3-4 Attack minion with Stampeding Kodo. Use on any 1-2 Attack minion in conjunction with Reversing Switch or Crazed Alchemist to destroy the minion instantly. This is due to their resulting Health being 0, causing them to be destroyed. Shrinkmeister can also be used to target your own minions. This can be useful for stealing a 4-5 Health minion with Sylvanas Windrunner, by preventing her from killing it outright when she attacks.

Quicksand Elemental is an almost strictly superior version of this card, outside of very niche cases where you want to target your own minions. This card is also generally outclassed by Scarlet Subjugator, which has lower stats but only half the mana cost.

Summon
Let us see if this works.

Gnomes are well-known for inventing devices that affect size, such as the Gnomish Shrink Ray and the World Enlarger mentioned in the Shrinkmeister's flavor text.

The Shrinkmeister specifically features as the unseen force behind the Miniature Warfare Tavern Brawl, reducing all minions to 1/1s with a mana cost of 1.