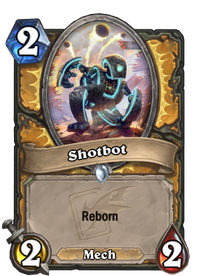 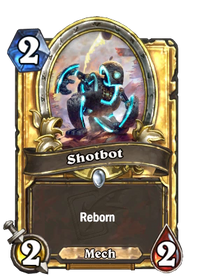 Shotbot is a common paladin minion card, from the Galakrond's Awakening set.

Two copies of regular Shotbot are obtained by defeating George the Fallen in Galakrond's Awakening's Chapter 4 of Explorers campaign.

Shotbot is very similar to Shielded Minibot; both are 2-mana 2/2 Mechs with a keyword that makes them need at least two hits to kill. In most cases, Shotbot has slightly less survivability, considering after the first hit it can be removed with any amount of damage, while Shielded Minibot needs at least 2 damage. The exceptions are against hard removal effects like Shadow Word: Pain and multi-hit attacks like Arcane Missiles, where Reborn is activated after damage or destruction is resolved. Regardless, both minions fill the same role for aggressive Paladin decks as a sticky early-game Mech.

Shotbot however is much weaker when buffed in case of attack trading. Any buffs like Blessing of Kings or Magnetic effects aren't kept when it gets Reborn, while Divine Shield will absorb damage once and keeps its buff.

Shotbot can also be compared to Harvest Golem: Shotbot is a 2/2 whereas Harvest Golem is a 2/3, and both are Mechs and spawn a 2/1 Mech on death. Since 1 extra mana for 1 extra Health is not worth it, it is in most situations better than Harvest Golem.

Shotbot is also a great minion that can be used to complete Making Mummies, being a well-statted card that can be played on curve.

Shotbot's artwork appears to be a reference to the Three-Point Landing visual trope.