Hearthstone Wiki
Register
Don't have an account?
Sign In
Advertisement
in: All cards, Wild format cards, Pages with no result queries, Goblin art

This article is using {{Card template}}.
See Help:Style guide/Card for how to edit this kind of article.
Edit this article
Shooting Star
49081 • BOT_453
Regular 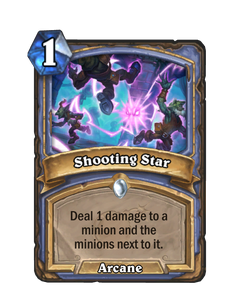 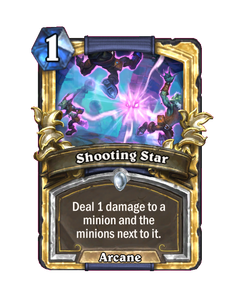 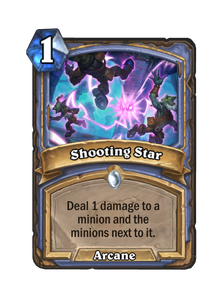 Shooting Star is a common mage spell card, from The Boomsday Project set. 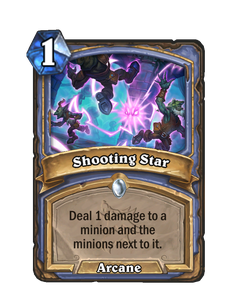 A cheap removal spell similar to Arcane Explosion, but at half the cost. It can be useful as a secondary Fireblast, clearing away Divine Shield or 1 health minions. Against most decks, being restricted to three minions isn't important since there probably won't be that many priority targets.

Shooting Star can ideally be used with Spell Damage, especially Cosmic Anomaly and Celestial Emissary, providing a cheap spell to make good use of the bonuses. With 2 Spell Damage, this card can deal with three separate medium minions for only 1 mana. This makes it great for dealing with Saronite Chain Gang or Doubling Imp.