This article is using {{Card template}}.
See Help:Style guide/Card for how to edit this kind of article.
Edit this article
Shirvallah, the Tiger
49981 • TRL_300
Regular 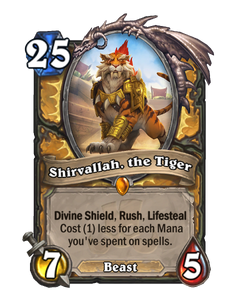 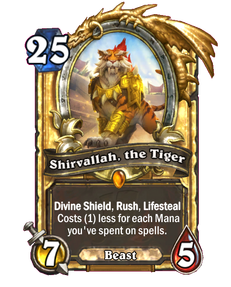 On bended knee Thekal placed his weapon upon Shirvallah’s altar, whereupon she slowly knocked it off with her paw. 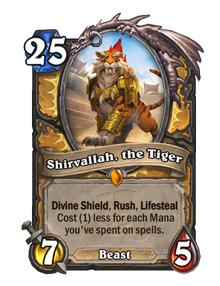 Shirvallah, the Tiger is a legendary paladin minion card, from the Rastakhan's Rumble set.

Shirvallah starts out as a very costly minion, which decreases over time as spells are played. Due to the amount of Mana it would require to reduce her cost to playable levels, Shirvallah works best in a control deck that run a good amount of spells. High cost spells like A New Challenger... helps lower her cost efficiently. Shirvallah's combination of keywords makes her an effective form of removal and healing with a decent body, moreso once she costs 0. Notice that a normal Standard Control Paladin deck with 2 copies of Equality, Consecration and Spikeridged Steed has enough spell to effectively reduce her cost to 0.

Alternative ways to summon Shirvallah include Oondasta's Overkill effect and Prismatic Lens, although this method renders the other card unplayable. The cost is readjusted AFTER the drawing phase, so, when drawing Shirvallah and other card, the reverted cost will still be 25.

Shirvallah creates a powerful combo with Holy Wrath, being able to do 25 damage at once. You can combine it with Baleful Banker with an empty deck to guarantee this combo. With Augmented Elekk and two Baleful Bankers, you can play two Holy Wraths for 50 damage on the next turn, while still having enough mana for Time Out!.

A powerful combo with shirvalla is to pair her with Youthful Brewmaster to play her twice in one turn, enabling you to deal a lot of damage to two minions and restoring up to 14 life to your hero.

Shirvallah can become insanely strong with Arch-Thief Rafaam's Lantern of Power. Not only because it will reduce its cost by 10, but it can be saved for her summoning, transforming her into a 17/15 0 cost minion that can destroy almost everything.

Shirvallah is a loa of tigers revered notably by Zandalari, Gurubashi and Darkspear trolls. Their last champion was High Priest Thekal, and at some point, their high priest was a Zandalari, who wielded The Warmace of Shirvallah, a brutal mace with an ornate frame which claimed many lives in an unbidden attempt to honor Shirvallah. Long ago, it was lost to the sea with the high priest who wielded it.

Shirvallah was held in Zul'Gurub against their will when the Hakkari were attempting to summon Hakkar the Soulflayer. By the time of the war against the Iron Horde, troll druids created a way for all druids to take on a half-tiger form like those of Shirvallah's champions, called the Claws of Shirvallah.

While Shirvallah is a long-established character in Warcraft lore, she has never previously been directly pictured nor described in much detail, making her Hearthstone appearance the first time she has been officially depicted. In Hearthstone lore, Shirvallah serves as the patron loa of Shirvallah's Tigers, the paladin team in Rastakhan's Rumble, and is described as a proud and noble loa, much like the paladins who worship her.[2] Much like her physical appearance, Shirvallah's association with the paladin class is unique to Hearthstone, as Zandalari paladins in World of Warcraft instead tend to be associated with the devilsaur loa Rezan.