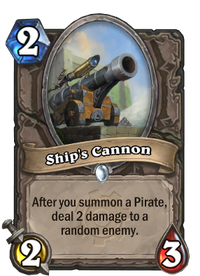 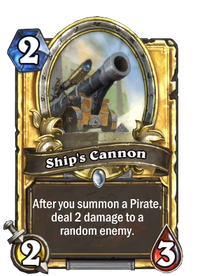 After you summon a Pirate, deal 2 damage to a random enemy.
Flavor text

If you hear someone yell, "Cannonball!" you're about to get wet. Or crushed.

Ship's Cannon is a common neutral minion card, from the Goblins vs Gnomes set.

Ship's Cannon can be obtained through Goblins vs Gnomes card packs, or through crafting.

This is a specifically Pirate-oriented card. It works best when the player is able to summon several Pirates immediately after playing it, before the opponent has the chance to remove it.

The Ship's Cannon can be useful for clearing the board of weaker minions, weakening stronger ones, or simply dealing additional damage to the opponent themselves.

When followed immediately by several cheaper Pirates, the Ship's Cannon can serve as a soft taunt, forcing players without access to AoEs to focus on removing this ongoing source of damage, thereby helping the player's other minions to survive the turn.

Triggers like Patches the Pirate combined with Gang Up can make a surprisingly effective amount of burst damage.