This article is using {{Card template}}.
See Help:Style guide/Card for how to edit this kind of article.
Edit this article
Shieldbearer
866 • EX1_405
Regular 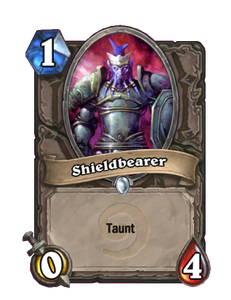 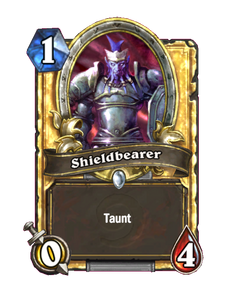 Have you seen the size of the shields in this game?? This is no easy job. 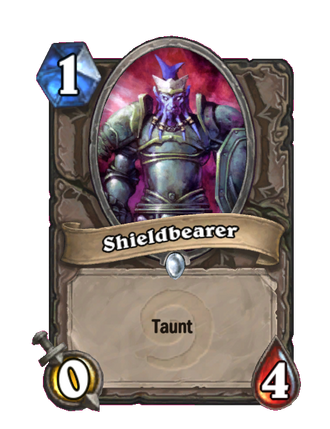 Shieldbearer is a common neutral minion card, inducted into the Legacy set, formerly from the Classic set. 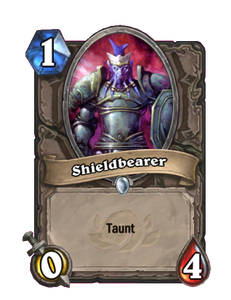 Shieldbearer is a very cheap taunt minion that can be placed early to help stall a game until more mana is available for stronger cards. A combination of

Inner Fire can turn this into a potentially game-ending powerhouse very early. That being said, you should take care, as always, to make sure that your opponent does not have any hard removal like

Shadow Word: Death. A safer and cheaper move may be to use a single

Inner Fire to create a 4/4 for only 2 mana, as well as being safe from both Shadow Word: Death and

Mirror Image in some key ways - Shieldbearer will deal more effectively with AoE attacks, but will only be able to stand a single hit from stronger minions. Due to mage decks regularly featuring spell synergy from cards such as

Mana Wyrm, it is rare for Shieldbearer to feature in a mage deck.

The draenei are a faction of uncorrupted eredar who fled their home world of Argus, and again from Draenor following the corruption of the orcs as part of Kil'Jaedan's plot to wipe out the draenei. Their base is on the Azuremyst Isles, near the west coast of Kalimdor.