This article is using {{Card template}}.
See Help:Style guide/Card for how to edit this kind of article.
Edit this article
Shield Slam
546 • EX1_410
Regular 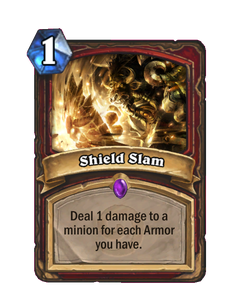 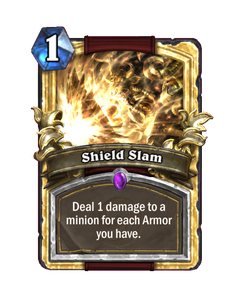 "What is a better weapon? The sharp one your enemies expect, or the blunt one they ignore?" - The Art of Warrior, Chapter 9 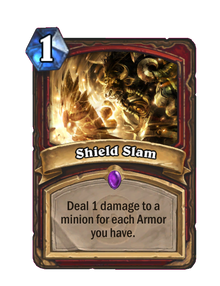 Shield Slam is an epic warrior spell card, inducted into the Legacy set, formerly from the Classic set. 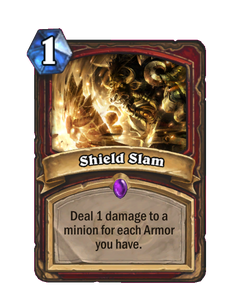 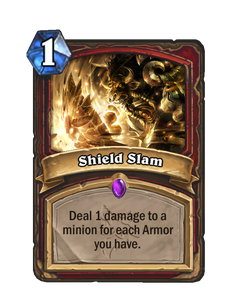 Two copies of regular Shield Slam are obtained for raising warrior to level 8.

Shield Slam (Core) is uncraftable and cannot be crafted or disenchanted.

Shield Slam has incredible synergy with the warrior hero power Armor Up!, and armor-boosting cards such as Shield Block, Shieldmaiden and Ironforge Portal. It's not uncommon for a warrior to have 5 or more armor, meaning Shield Slam is usually capable of easily killing strong minions for only 1 mana.

As with other damaging spells, Spell Damage can be used to increase the damage dealt by Shield Slam. More unusually, because Shield Slam has a base damage of 0, increased by the player's Armor total, Spell Damage will allow Shield Slam to deal damage even when the player has no Armor. This is most significant with Malygos, who will allow a player with 0 Armor to cast Shield Slam for 5 damage.

A less common use of Shield Slam is for triggering effects such as Counterspell or Gadgetzan Auctioneer. As a 1-mana spell it is very useful for these purposes, and can be used for such without the hero having any Armor.

Shield Slam can be used to damage friendly minions. This can be useful for triggering powerful effects such as enraging Grommash Hellscream or activating Sylvanas Windrunner's Deathrattle. Always keep in mind the amount of damage Shield Slam will do to avoid misplays, such as destroying your own Grommash.

Since this card is based on the Warrior's armor, it's always a good idea to keep their armor count to 0. In short notice, early turns can give them 2-5 armor from Hero Power and other cards. Have minion health be at least +1 higher than their armor.

Based upon the World of Warcraft ability of the same name, this is the bread and butter of any true Protection warrior. It is a staple attack which deals damage and generates Rage to fuel the warrior's other abilities.