Hearthstone Wiki
Register
Don't have an account?
Sign In
Advertisement
in: All cards, Wild format cards, Pages with no result queries, Blood elves

This article is using {{Card template}}.
See Help:Style guide/Card for how to edit this kind of article.
Edit this article
Shattered Sun Cleric
608 • EX1_019
Regular 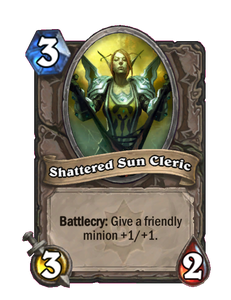 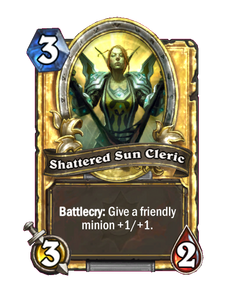 They always have a spare flask of Sunwell Energy Drink™! 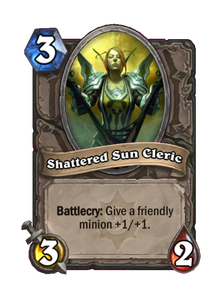 Shattered Sun Cleric is a neutral minion card, inducted into the Legacy set, formerly from the Basic set. 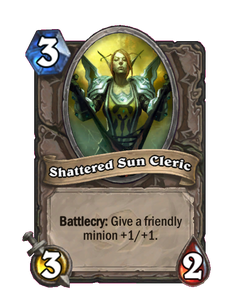 Regular and golden Shattered Sun Cleric are uncraftable and cannot be crafted or disenchanted.

Summon
We must cleanse the Sunwell.

The Shattered Sun Offensive is an army of blood elf and draenei priests, paladins, magi and warriors rallied by the naaru to combat Kael'thas Sunstrider's mad bid to use the Sunwell as a portal to summon his master, Kil'jaeden. Their operations are centered around the Isle of Quel'Danas, where the Sunwell is located. The Offensive is the culmination of a plea for unity between the draenei priests of the Aldor and the blood elf wizards of the Scryers in an effort to prevent Kil'jaeden's summoning, which would result in the end of all life on Azeroth.