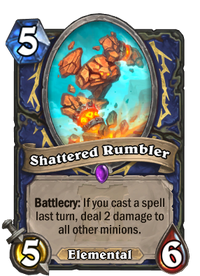 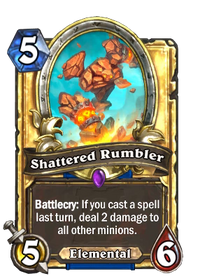 Battlecry: If you cast a spell last turn, deal 2 damage to all other minions.

HAPPY BIRTHDAY TO THE GROUND!

Shattered Rumbler is an epic shaman minion card, from the Ashes of Outland set.

With the condition fulfilled, Shattered Rumbler effectively casts Consecration with a Pit Fighter, which can deal with small minions and remain in play to threaten larger ones. This allows for a tempo swing following up on turns spent casting slow spells. Good cards to fulfill the condition are Hex, Torrent, and Far Sight. Be careful using Overload spells, since it can be awkward to pay 5 mana while Overloaded in the midgame.

Keep in mind that Shattered Rumbler also hits friendly minions, which can be relevant even for Control Shaman if you have Totems in play.

Shattered Rumblers are Earth Elementals located along the southern edge of Nagrand, in a distinctive but nameless region where the area is crumbling into the Twisting Nether.