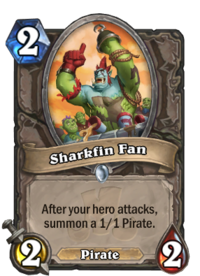 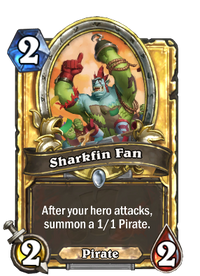 After your hero attacks, summon a 1/1 Pirate.
Flavor text

His taste in soup is criminal.

Sharkfin Fan is a common neutral minion card, from the Rastakhan's Rumble set.

Sharkfin Fan can be obtained through Rastakhan's Rumble card packs, or through crafting. 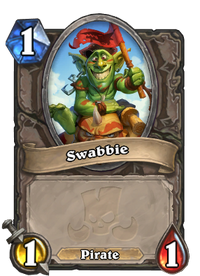 The Sharkfin Fan is a very powerful play on turn 2 if the player is equipped with a weapon, giving a total of 3/3 in stats spread across two minions when compared with another 2 man minion, the Murloc Tidehunter, which summons 3/2 in stats spread across two minions. Even Rogue can equip weapons on turn 1 consistently, additionally, this minion is a pirate, which has synergy with other pirate synergies that Rogue has access to, such as Bloodsail Howler and Cannon Barrage.

In wild, Pirate Warriors can also consistently equip weapons in the early game, which might benefit this card, but since the nerf to Patches the Pirate, Pirate Warrior as a whole has not seen a lot of play, so an addition of one niche card is probably not going to make a significant enough difference.

This orc is evidently a big fan of Gral's Sharks, to the point of painting the team's logo on his chest, wearing various pirate accessories, and even dyeing his hair and face to make himself look more like a troll.