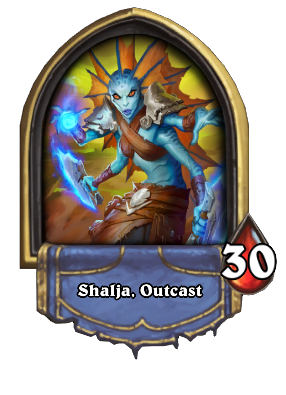 Shalja and Aranna spar, learning the ways of the Demon Hunter...

Shalja, Outcast is the first boss encounter in Chapter 3: To be a Demon Hunter of Trial by Felfire Story.

The training begins without delay, as our fellow outcasts join the fray. As Demon Hunters the four shall be, to carry out their destiny.

In their path to becoming Demon Hunters, Aranna faces off against Shalja as the first boss of Chapter 3. Primarily, you should rely more on your weapons (namely Kingsbane) to prevail, as Shalja's Fel Lightning has the chance to cast removal spells such as Beakered Lightning, Lightning Storm and Elemental Destruction; making it hard to maintain a good board.

In the early game, you should focus on playing and buffing your Kingsbane to help control the board, using any remaining mana to play minions when necessary. Try not to go face early on as it might be difficult to redraw it, even with the use of your Hero Power. Reaching the mid-game, start using it to go face, while using your remaining mana to stall with your minions. Use your Hero Power or Cavern Shinyfinder to redraw Kingsbane as much as possible. If done correctly, Shalja's health would be whittled down by the time you reach the late-game.

Killing her quickly is important because later when she reaches 10 mana she'll be capable of putting up trios of Stormblockers via Eye of the Storm. Their taunts prevent direct attacks with weapons against her, and the damage they do in response is suicidal.

Countermeasures include using Doomerang (which doesn't result in taking their counterattack) or protecting Aranna with Blur during the turn she attacks.

Shalja, Outcast
Focus on the fight!

Shalja, Outcast
Dodge this, my lady!
Lord Illidan is right... my rage is my power!
The Rusted Legion will fall before us!
This power... it burns my veins!

Shalja, Outcast
Do not underestimate me, Lady Aranna.
I don't need to beat you… I just have to prove myself.
With this power... I can give up the elements!

Illidan Stormrage
Aranna. Your prowess in combat is impressive.
Aranna Starseeker
I could never beat my sister. She was competitive in everything.

Illidan Stormrage
Your training begins! Reach deep down. All you've suffered, turn it 'round!

Illidan Stormrage
All of your hurt, turn it to rage... Use your anger – shatter your cage!

Illidan Stormrage
We all have demons, let yours out! Feel its power as your horns sprout!

A furious fighter of fel and scales!

How well do you fight underwater, my lady?

Assist me, mighty Naga. I have much to learn...

I thought this was a one-on-one...

But with his help I'll cleanse these wastes. I'll change this world, yes THAT's my place! (becomes Aranna in Training)

Shalja, Outcast is original to Hearthstone. She is a naga.

The serpentine Naga are some of the most formidable villains of Azeroth. Masters of sorcery, the naga were formerly night elves, members of Queen Azshara's court in the War of the Ancients. They were transformed into naga by the Old Gods, and now haunt the seas of Azeroth building a great civilization on the ocean floor.