This article is using {{Card template}}.
See Help:Style guide/Card for how to edit this kind of article.
Edit this article
Shaku, the Collector
40905 • CFM_781
Regular 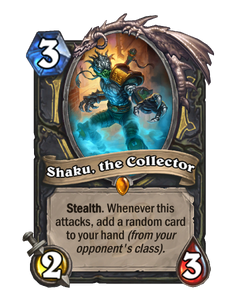 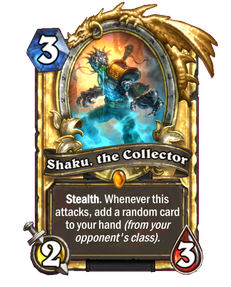 Dimensions: Full • 330 x 410px
Elite
Stealth. Whenever this attacks, add a random card to your hand (from your opponent's class).
Flavor text

Aya even staged an intervention once, but Shaku still insists that he is not a hoarder. 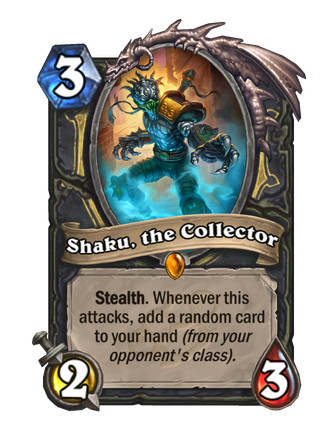 For the event version of this card, see Shaku, the Collector.

Shaku, the Collector is a legendary rogue minion card, from the Mean Streets of Gadgetzan set.

Example: A Shaku played before

Freezing Trap would trigger and add a card upon attacking, then would be sent back to the hand by the trap.[1]

Example: A Shaku played after Freezing Trap would be returned to the hand upon attacking, before it could trigger and add a card.[2]

Shaku serves as yet another source of non-Rogue cards, alongside

Swashburglar, but his effect is renewable as long as he survives. His stats are below average but comes with Stealth, which almost guarantees Shaku will generate at least one card, but makes him easily removable afterwards. Fortunately, he plays on curve perfectly with

Shadow Sensei to buff him into a 4/5, increasing his chance of surviving longer to create more cards.

Summon
Succumb to your darkness.

Shadowbeast, he is a "sha creation",[3][4] but he has gained a much higher level of sentience than the rest of his kin.[3] He is "super evil, super old, and super greedy", and is rumored to whisper the name "Shaohao".[5]

The sha (known as ikk to the hozen) are malevolent spirits found in Pandaria. Physical manifestations of negative emotions such as fear, hatred, or anger, they were spawned from the dying breath of the Old God Y'Shaarj when it was slain by the titans.

For thousands of years, the sha lay relatively dormant below Pandaria, but the arrival of the Alliance, the Horde and their war on Pandaria's shores caused the sha to once again rise up to threaten the land. However, since the heart of their creator was drained of its last remaining power during the Siege of Orgrimmar, the sha will eventually cease to be.