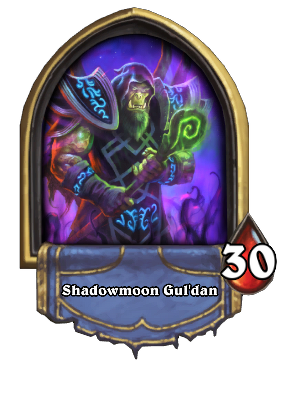 Shadowmoon Gul'dan is an alternate hero for the

This is Gul'dan's appearance when he was in Shadowmoon Valley, approaching the Shadowmoon clan.

Once unlocked and selected for use, Shadowmoon Gul'dan replaces Gul'dan whenever playing with a Warlock deck, as well as:

When viewed in the collection, Shadowmoon Gul'dan has the following flavor text:

In the early days, Gul'dan used his influence with the Shadowmoon clan to corrupt the Horde. Guess he couldn't just enjoy the dinner parties. Obtained by purchasing the Shadowmoon Gul'Dan bundle.

Most of Shadowmoon Gul'dan's sounds are the same as Gul'dan. Unique, different ones are noted as Unique in References section.