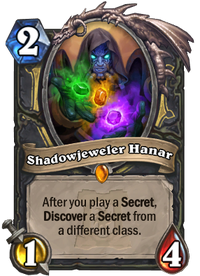 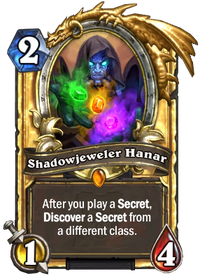 After you play a Secret, Discover a Secret from a different class.
Flavor text

What is a shadowjeweler? A miserable little pile of secrets.

Shadowjeweler Hanar is a legendary rogue minion card, from the Ashes of Outland set.

Shadowjeweler Hanar can be obtained through Ashes of Outland card packs, through crafting, or as an Arena reward.

Shadowjeweler Hanar lets the Rogue cycle through a large number of Secrets by himself, so long as they have an initial Secret to trigger his effect. You will be able to infinitely use Hanar's effect if he remains on the board, since you'll always have at least one Secret left at the end of your turn. Remember that you can only control 5 Secrets at a time, however. Hanar's unusually high health makes him likely to survive your opponent's turn, even if played on turn 2.

In general, it's a good idea to prioritize taking Secrets that protect Hanar, such as Counterspell, Pressure Plate, and Pack Tactics. It's also important to keep track of your Secrets in play, since you can't have duplicate Secrets in play. Be careful using Bamboozle, since the transform effect can prematurely remove Hanar from the board.

Shadowjeweler Hanar is unique to Hearthstone. His presence in the Ashes of Outland set may be a reference to how Jewelcrafting was first introduced during the Burning Crusade expansion.