This article is using {{Card template}}.
See Help:Style guide/Card for how to edit this kind of article.
Edit this article
Shadowflame
147 • EX1_303
Regular 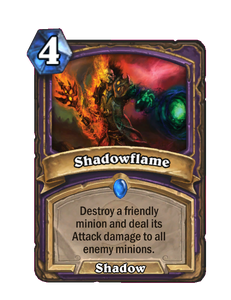 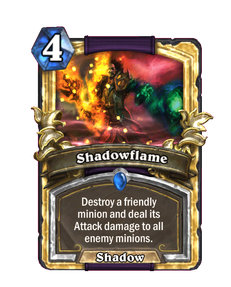 Start with a powerful minion and stir in Shadowflame and you have a good time! 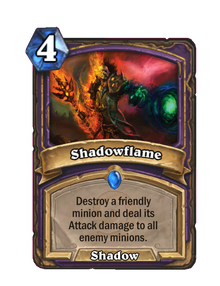 Shadowflame is a rare warlock spell card, inducted into the Legacy set, formerly from the Classic set. 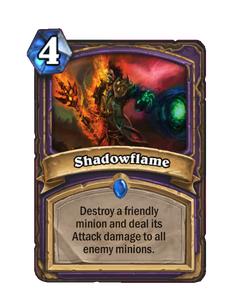 Ideally used on a target with a high Attack value, or when facing several opponents, in order to maximise its destructive potential. Also excellent for use in combination with Power Overwhelming, benefiting from the increased Attack and effectively removing the spell's drawback. Shadowflame's downside is also minimised when cast upon low value or low health targets such as Magma Rager, especially if they are expected to be destroyed next round.

It is usually a good idea to use the target to attack before casting Shadowflame. It can also be used on freshly summoned targets for one-turn board clear combos.