This article is using {{Card template}}.
See Help:Style guide/Card for how to edit this kind of article.
Edit this article
Shadowfiend
2566 • AT_014
Regular 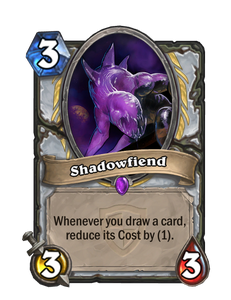 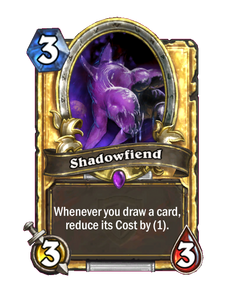 Hopes to be promoted to "Shadowfriend" someday. 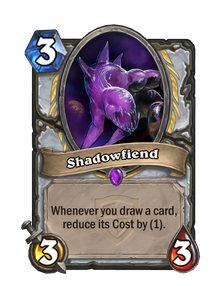 Shadowfiend is an epic priest minion card, from the Grand Tournament set.

Best used with other effects that draw cards. Northshire Cleric works well with this card.

Shadowfiend is a priest spell that summons a Shadowfiend to fight alongside the priest for 12 seconds, dealing Shadow damage. A pet action bar appears for the priest to command and control its spells.

The Shadowfiend serves as a source of additional damage output, and previously as a means of restoring mana. Priests can upgrade the Shadowfiend with the Mindbender talent, altering its appearance and causing its attacks to restore mana as well as dealing extra damage.