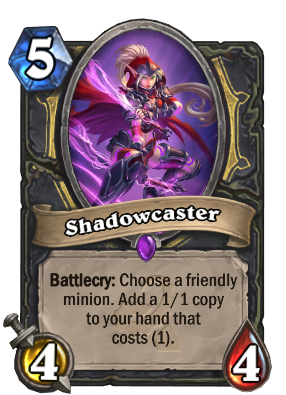 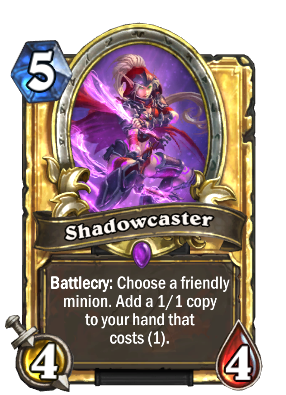 Battlecry: Choose a friendly minion. Add a 1/1 copy to your hand that costs (1).
Flavor text

I mean, it's not creepy if you ASK before you steal their shadow to make a small replica of them to keep on your shelf.

Shadowcaster is an epic rogue minion card, from the Whispers of the Old Gods set.

Shadowcaster can be obtained through Whispers of the Old Gods card packs, or through crafting.

This minion would work well in a deck with minions with powerful Battlecries, Deathrattle or Combo effects, since their value lies in their effects and not their stats, allowing the copy to provide most of the same value again but for only 1 mana. Other effects such as that of The Lich King or Gadgetzan Auctioneer can also prove useful, but will be unlikely to survive for long.

Silences can be used to restore the 1/1 copy to its original stats, which can be worthwhile with bigger minions, but will also remove any abilities. Cards that can re-summon the minion like Moat Lurker and Corpse Raiser can also be used.

You could fill your board with Shadowcasters using only one copy on the board and in your hand. With Valeera the Hollow, you can maintain an infinite supply of 1/1 Shadowcasters while still being able to copy one other minion. For example, you can summon Jade Spirit, copy it with a 1/1 Shadowcaster, then copy that Shadowcaster with the Shadow Reflection copy to create an infinite combo of Jade Golems every turn.

Shadowcaster has even more effective combos in Wild, such as copies of Ragnaros the Firelord and Reno Jackson. Brann Bronzebeard or Spirit of the Shark gives them even more power by creating two copies, giving them more flexibility and allowing for setups of even crazier combos.