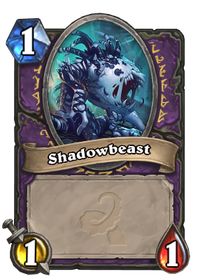 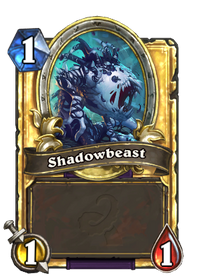 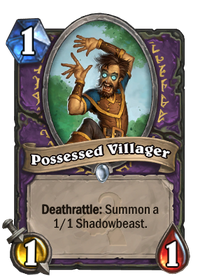 This card depicts the smallest and weakest form of sha: negative emotions made manifest as malevolent spirits.

The sha (known as ikk to the hozen) are malevolent spirits found in Pandaria. Physical manifestations of negative emotions such as fear, hatred, or anger, they were spawned from the dying breath of the Old God Y'Shaarj when it was slain by the titans.

For thousands of years, the sha lay relatively dormant below Pandaria, but the arrival of the Alliance, the Horde and their war on Pandaria's shores caused the sha to once again rise up to threaten the land. However, since the heart of their creator was drained of its last remaining power during the Siege of Orgrimmar, the sha will eventually cease to be.

There is also a type of darkhound known as a Shadowbeast in the servant quarters of Karazhan (the tower of Medivh), but it appears to be entirely unrelated.