This article is using {{Card template}}.
See Help:Style guide/Card for how to edit this kind of article.
Edit this article
Shadow Word: Pain
1367 • CS2_234
Regular 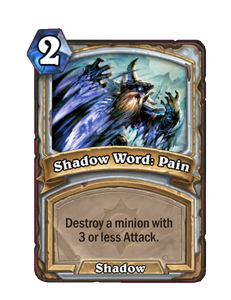 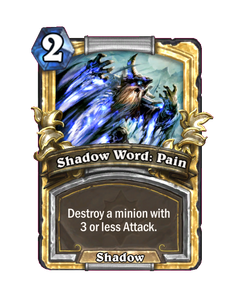 A step up from a spell cast by many beginning acolytes: "Shadow Word: Annoy". 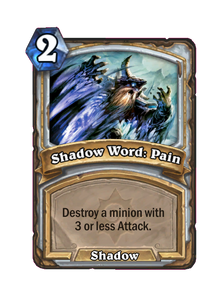 Shadow Word: Pain is a priest spell card, inducted into the Legacy set, formerly from the Basic set. 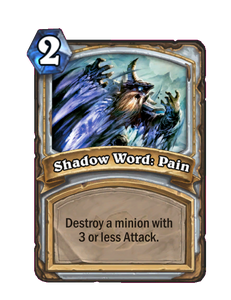 Regular and golden Shadow Word: Pain are uncraftable and cannot be crafted or disenchanted.

Shadow Word: Pain is a destroy effect that works on any minion with 3 or less Attack. It is a key part of the priest's removal range, along with Shadow Word: Death, which can remove any minions with 5 or more Attack. It is particularly useful for taking out lower Attack minions with high health (such as Gurubashi Berserker or Water Elemental) or with particularly powerful effects. It can be useful in the early game to prevent a single low-cost minion from dealing substantial damage or establishing board control, especially if the priest does not yet have any suitable minions to play.

As a destroy effect this card is useful for dealing with cards such as Acolyte of Pain, whose effects trigger each time they take damage, without triggering the effect.

Shadow Word: Pain (SW:P) is a priest spell from World of Warcraft that deals a small amount of instant damage and places a damage over time (DoT) debuff on the target. The priest class's main DoT, SW:P is a key part of Shadow priests' spell range, ideally placed on each enemy in order to deal maximum damage simultaneously to all targets, and is critical to achieving good multi-target damage. Critical ticks from SW:P also create a Shadowy Apparition, a shadowy version of the priest that floats toward their target, dealing Shadow damage when it reaches it. SW:P is also handy for dealing instant damage while running.