This article is using {{Card template}}.
See Help:Style guide/Card for how to edit this kind of article.
Edit this article
Shadow Visions
41169 • UNG_029
Regular 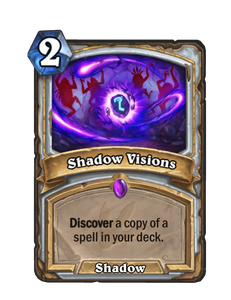 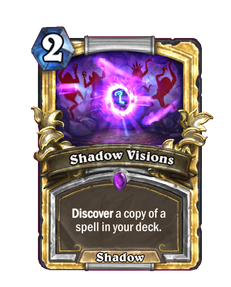 This one’s a bird. And here’s a bunny! 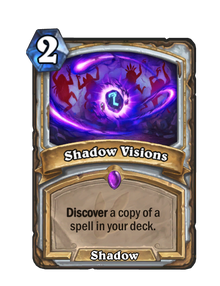 Shadow Visions is an epic priest spell, from the Journey to Un'Goro set.

This card lets you gain additional copies of removal such as Shadow Word: Pain/Death and Holy Nova/Dragonfire Potion.

Shadow Visions is even better when used for value - one strong combo is to use this after Elise the Trailblazer has been played, searching for the Un'Goro Pack. Shadow Visions can also be used with Lyra the Sunshard to generate Priest spells.

With the help of two Radiant Elementals to lower mana costs, and a second copy of Shadow Visions still within your deck - especially if it is one of three or fewer spells left in the deck - you can continually Discover more Shadow Visions copies. With Lyra, this can be repeated enough times to generate a full hand of priest spells in one turn. The same concept can be used for a one turn kill strategy using Mana Addict, Red Mana Wyrm, or Shadowreaper Anduin, with the repeated usage of Shadow Visions stacking up enough damage to kill the opponent.

Example: You get two Radiant Elementals onto the board with Shadow Visions in hand, and have at most 3 spells in your deck, at least one of which is Shadow Visions. You cast Shadow Visions repeatedly for zero mana, selecting Shadow Visions again during each Discover choice, until the queue of animations forces the opponent to rope out and lose their turn. You deal a little bit of damage each turn then repeat the process, until the opponent loses the game.[2][1]

The artwork for this card represents a titan glyph with ancient knowledge that inspired a group of murlocs to draw a cave painting.[5]