This article is using {{Card template}}.
See Help:Style guide/Card for how to edit this kind of article.
Edit this article
Shadow Sensei
40695 • CFM_694
Regular 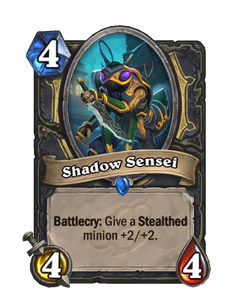 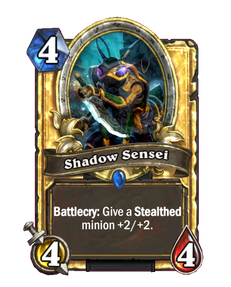 He used to be Aya's tutor, but she fired him for bugging her too much. 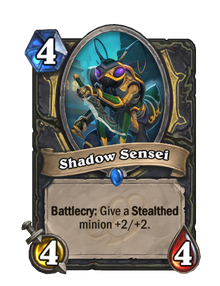 Shadow Sensei is a rare rogue minion card, from the Mean Streets of Gadgetzan set.

Decent stats for a 4 mana card, just use its Battlecry on a friendly Stealth minion. Plays on curve with Jungle Panther, Silent Knight, Shadow Rager, and Shaku, the Collector.

This can be combined with cards that grant Stealth, such as Fadeleaf Toxin and Master of Disguise, to buff minions that would normally be unaffected by the Battlecry.