This article is using {{Card template}}.
See Help:Style guide/Card for how to edit this kind of article.
Edit this article
Shadow Madness
220 • EX1_334
Regular 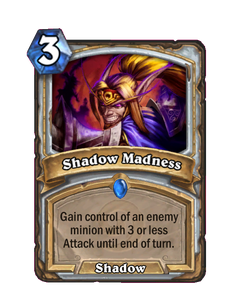 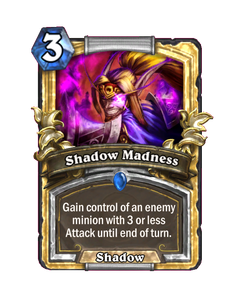 Dimensions: Full • 330 x 410px
Gain control of an enemy minion with 3 or less Attack until end of turn.
Flavor text

You can rationalize it all you want, it's still a mean thing to do. 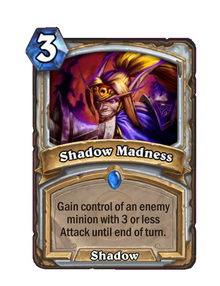 Shadow Madness is a rare priest spell card, inducted into the Legacy set, formerly from the Classic set. 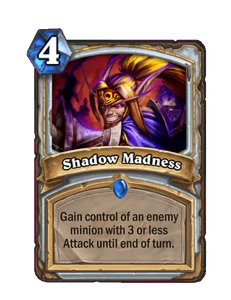 Example: A stolen Raid Leader buffs the stealing player's minions for the rest of the turn.

Example: The stealing player benefits from the effects of a mind controlled Young Priestess or gets an Imp from a stolen Imp Master.

Example: This spell steals a Flametongue Totem whose positional effect was buffing 2 leftward enemy minions. At the end of the turn, it returns to the right side for the opponent and only buffs their rightmost minion.

Example: One of 7 enemy minions is stolen by this spell, then an enemy Haunted Creeper is killed, resulting in 7 minions again on the enemy side. The stolen minion is destroyed at the end of the turn since it cannot return to its side.

Shadow Madness is a very tactical card, capable of being used to great effect. Unlike permanent mind control effects like Mind Control, minions that are affected by this card are not exhausted, but can be used by the priest that same turn.

One common tactic is to use the controlled minion to attack another, hopefully destroying both minions. This effectively grants removal for two minions with only one card.

This card is can be used to steal valuable minions from the opponent which will generate more powerful minions, like Direhorn Hatchling.

When using return cards such as Ancient Brewmaster to permanently seize control of a Shadow Madness'd minion, the target can ideally be used to attack before being returned to the hand, since any damage taken by it will be cancelled when it leaves the battlefield.

Can also be very useful for removing a powerful taunt minion in order to allow your minions to directly attack the enemy hero or an important minion.

As with all mind control effects, any abilities or events that occur while the minion is controlled will treat the controlling player as the minion's owner. This includes deathrattles and other card text effects.