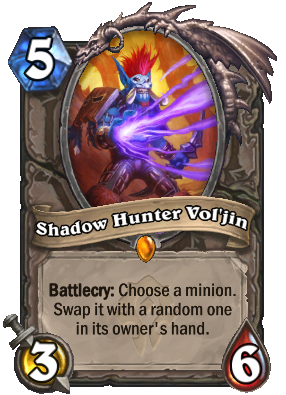 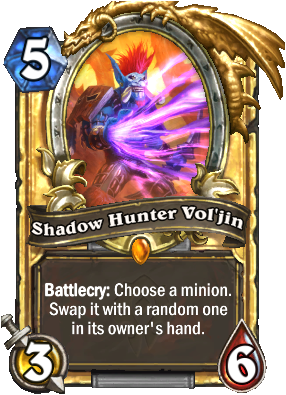 Battlecry: Choose a minion. Swap it with a random one in its owner's hand.
Flavor text

You wouldn’t see this swap-meet on the Zandalari Roadshow.

For other appearances of Vol'jin, see Vol'jin (disambiguation).

Shadow Hunter Vol'jin is a legendary neutral minion card, from the Forged in the Barrens set.

Shadow Hunter Vol'jin is uncraftable and cannot be crafted or disenchanted.

Shadow Hunter Vol'jin can target both a friendly minion or an enemy minion, making him a versatile option. The player will be able to choose which minion to replace, however the minion summoned will be random.

When targeting a friendly minion, you will want to replace a smaller or insignificant minion with a larger threat and putting them into play for less mana than usual. Any Battlecries will not be activated, so it is best to summon a minion that does not require Battlecries to be powerful, or one with a detrimental effect. Vol'jin's effect can also be used to activate a minion's battlecry effect a second time while putting an additional minion on the board.

When targeting an enemy minion, you want the opposite effect to happen, a larger threat being replaced by a weak minion. Targeting an enemy could have the desired effect of putting a weaker minion in it's place, but it does come with the risk of something even stronger being played. Alternatively, Shadow Hunter Vol'jin can be used effectively as a silence effect to bypass taunt minions and finish off the enemy hero, even if the replacement is a powerful minion. He can also be used when you suspect your opponent is holding a Battlecry minion, forcing it onto the board without triggering the Battlecry (similar to Dirty Rat).

There are 91 achievements related to Shadow Hunter Vol'jin.

The shadow hunter Vol'jin, son of Sen'jin, was the Warchief of the Horde, as well as Chieftain of the Darkspear tribe and rightful ruler of Durotar and the Echo Isles.

Vol'jin swore to do everything in his power to lead the Darkspear tribe just as his late father, Sen’jin, would have. For years Vol'jin resided in Orgrimmar, offering strategic advice to Thrall and assisting with critical operations such as retaking the Undercity after the Forsaken bastion had been usurped by Grand Apothecary Putress and the dreadlord Varimathras. During the Cataclysm, however, Vol'jin came into conflict with the Horde’s new warchief, Garrosh Hellscream. Alienated by the orc’s extremism and lust for war, the troll leader departed Orgrimmar and took up residence on Darkspear Isle. Despite his conflict with the new warchief, Vol'jin remained loyal to the Horde and opposed the efforts of the Zandalari to create a new troll empire in the wake of the Shattering.

By the time the war between the Alliance and Horde came to the shores of Pandaria, Vol'jin had become a bitter enemy of Garrosh. After surviving an assassination attempt by one of Hellscream's Kor'kron, Vol'jin went into hiding, while rallying support within the Horde itself to end Garrosh's reign. With Garrosh's defeat and capture, Vol'jin was led to assume the mantle of Warchief of the Horde, with the personal encouragement of Thrall and the rest of the Horde's leadership, becoming the first non-orc to earn the title. He ruled the Horde until he was mortally wounded during the battle for the Broken Shore; though he was evacuated back to Orgrimmar, he succumbed to fel poisoning from his wound. Following the guidance of the loa, with his dying breath Vol'jin named Sylvanas Windrunner, the queen of the Forsaken, as the new Warchief of the Horde.