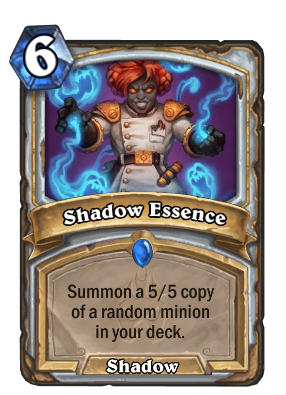 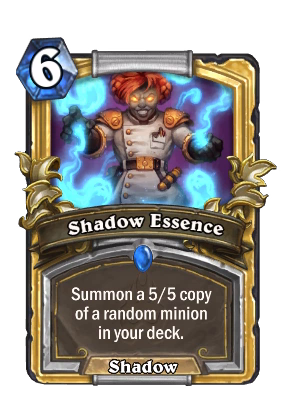 Summon a 5/5 copy of a random minion in your deck.
Flavor text

Difficult to bottle up and sell. But it packs a punch.

Shadow Essence is a rare priest spell card, from the Knights of the Frozen Throne set.

Shadow Essence can be obtained through Knights of the Frozen Throne card packs, or through crafting.

If you have no more minions in your deck, Shadow Essence is castable but has no effect.

Shadow Essence has a similar effect to Barnes' Battlecry, except that it summons a 5/5 copy instead with no other accompanying minion. While even cheaper minions with valuable effects can benefit from having a 5/5 body that is harder to remove, such as Northshire Cleric and Radiant Elemental, it is best when it summons high-cost cards like Obsidian Statue, Ysera, and The Lich King. It also synergizes well with Charge cards, guaranteeing 5 damage to the enemy hero unless blocked by Taunt. Conversely, this spell has poor synergy with Battlecry cards.

The extra copy of a minion spawned by this spell increases the odds of summoning it again via Resurrection effect cards such as Onyx Bishop and Eternal Servitude.