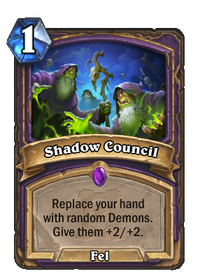 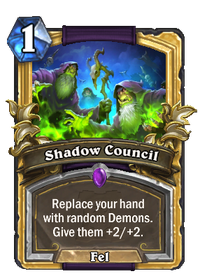 Replace your hand with random Demons. Give them +2/+2.
Flavor text

Why is everybody in Outland replacing their hands?!

Shadow Council is an epic warlock spell card, from the Ashes of Outland set.

Shadow Council is best played with a large hand of small spells, ditching them for more powerful cards. Its effect is similar to that of the Golden Monkey or Arch-Villain Rafaam, but can be cast much earlier in the game to potentially highroll your opponent. The negative effects of many demons becomes moot with a +2/+2 stat buff. Since it isn't class restricted, it also has a chance to give Warlocks powerful Demon Hunter demons.

For extra power, Shadow Council can be played the turn before Imprisoned Scrap Imp awakens. Set up the Scrap Imp, then spend the next two turns holding the board and drawing cards. This provides a colossal +4/+3 buff to a hand full of minions.

The Shadow Council was an elite sect of warlocks that secretly controlled the Old Horde.

When Gul'dan supplanted Ner'zhul as Kil'jaeden's favorite pawn, he began to reorganize the clans into a single engine of destruction. To this end, he promoted a public figurehead, Blackhand of the Blackrock clan to the new position of Warchief. Though Blackhand was cunning, he lacked the loyalty to Kil'jaeden and deviousness needed to drive the Horde. Thus, Gul'dan secretly brought together a collection of warlocks, necrolytes, chieftains, and even the occasional ogre into a clandestine council — the Shadow Council.

The original purpose of the Council was to ensure the stability of the Horde in their quest to destroy the draenei, manipulate the clans and spread the use of warlock magics. When the time came, the Shadow Council fed the blood of Mannoroth to the clans, apart from the Frostwolf clan (whose chieftain, Durotan, forbade them from partaking) and a few other individuals.

The Council made their headquarters at the Black Temple and oversaw the destruction of the draenei until Kil'jaeden mysteriously vanished. As the Horde began to fragment, the Shadow Council was contacted by Medivh, who offered a new world to plunder.