This article is using {{Card template}}.
See Help:Style guide/Card for how to edit this kind of article.
Edit this article
Shade of Naxxramas
1784 • FP1_005
Regular 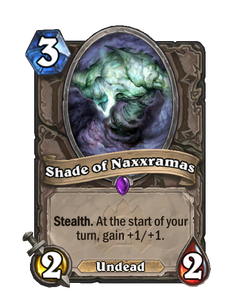 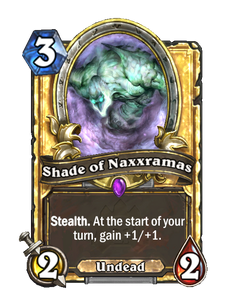 The Shades of Naxxramas hate the living. They even have a slur they use to refer them: Livers. 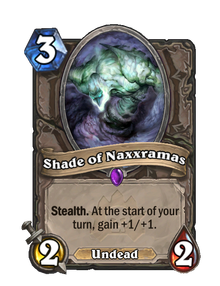 Shade of Naxxramas is an epic neutral minion card, from the Naxxramas set.

The Shade of Naxxramas, while initially weak, has game-winning potential. Stealth allows the Shade to attack on its own terms, and its ever-growing statistics poses a serious threat to opponents. Due to its resistance to most removals, buffs from classes like the Druid, Shaman or Paladin can use the Shade as a target. Whether it be a Savage Roar, Windfury or Blessed Champion, this minion can end the game in a single turn if left unchecked.

AoE removal is the bane of the Shade, especially when first played as a measly 2 Health; a simple Consecration or Holy Nova can neutralize the Shade. Random target effects such as Deadly Shot and Stampeding Kodo can also affect it regardless of its Stealth.

Summon
Naxxramas is ours.

Shade of Naxxramas is a mob found in the Naxxramas raid in World of Warcraft.

Shade of Naxxramas was originally designed as a 4 Mana 1/1 minion. [1]