This article is using {{Card template}}.
See Help:Style guide/Card for how to edit this kind of article.
Edit this article
Sethekk Veilweaver
56603 • BT_254
Regular 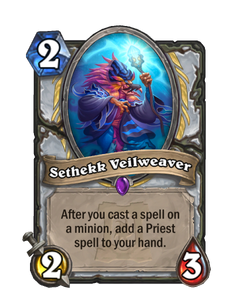 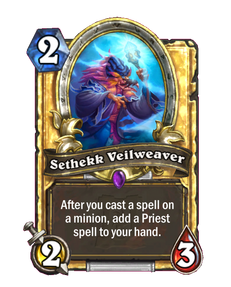 Dimensions: Full • 330 x 410px
After you cast a spell on a minion, add a Priest spell to your hand.
Flavor text

The Sethekk weren't able to survive this long by being wasteful with their power. Or their wacky hats. 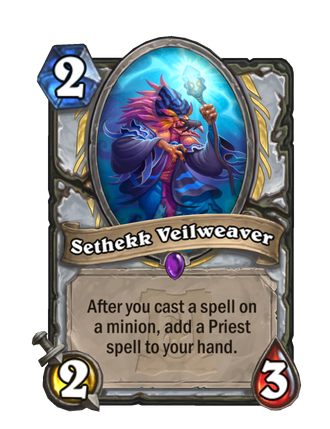 Sethekk Veilweaver is an epic priest minion card, from the Ashes of Outland set.

This minion has the potential to create a large amount of value for relatively little investment and low mana cost. As priest does have plenty of spells that target minions, such as

Power Word: Shield, Sethekk Veilweaver can generate plenty of useful spells. The buffs and removal generated from these spells can potentially ensure that this minion stays on the board for more than one turn, despite its initially low health. As such, it can be used for massive tempo swings or simple value generation, depending on your situation.

The Sethekk are a faction of the arakkoa who believe themselves to be the true and most loyal followers of the master of all arakkoa. The nature of this master is unknown to outsiders; the arakkoa do not speak of him except to say that his mysteries are for the feathered people alone.
The Sethekk were formed when Talon King Ikiss proclaimed himself Terokk reborn, and gathered the broken and crazed arakkoa cursed by Sethe to his cause. The Sethekk used Sethe's power to control Anzu, the Raven God; in an alternate timeline the ritual to control Anzu was halted by adventurers. As the arakkoa spiraled further into darkness, the Sethekk grew in power in arakkoa society. Eventually the Sethekk abandoned the worship of Sethe in favor of an unnamed Old God--the aforementioned "master of all arakkoa."

The Sethekk Veilweaver's name may be a reference to the "veil" that the Arakkoa Outcasts seem to revere. While never elaborated upon, it is implied to be the shadow/illusion magic the outcasts use to remain hidden in the shadows. Arakkoa settlements also tend to be called veils.