This article is using {{Card template}}.
See Help:Style guide/Card for how to edit this kind of article.
Edit this article
Serpentshrine Portal
56411 • BT_100
Regular 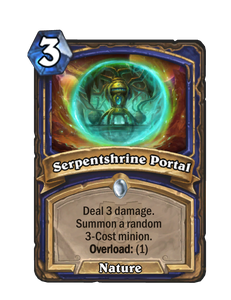 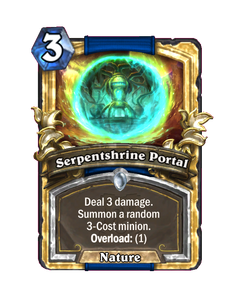 This is why you never flush a three-cost minion. 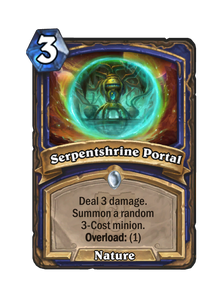 Serpentshrine Portal is a common shaman spell card, from the Ashes of Outland set.

Serpentshrine Portal is a strong card for creating tempo, destroying an opposing minion or pressuring the opponent's hero and summoning a minion of your own. Despite costing far more than Lightning Bolt, this card creates a significant tempo swing in the early game.

This card is good to play on curve before a Marshspawn or Torrent, fulfilling their requirements nicely. However, it's a poor card to use with Shattered Rumbler, since the Overload can make the mana awkward.

The below table lists all 3-cost collectible minions in Standard format, representing the range of possible minions summoned by Serpentshrine Portal.

Serpentshrine Cavern is a 25 man Raid, and the fourth wing of Coilfang Reservoir.

These are the words of Lord Illidan Stormrage to his most trusted lieutenant, Lady Vashj. Shortly after the Third War, when Illidan requested the aid of the naga, a group of naga led by Lady Vashj answered his call. Ever since, Vashj has displayed a fierce dedication to Illidan.

Now the naga witch carefully monitors Coilfang's operations from her seat of power within Serpentshrine Cavern. Far more at home here among the waters of the reservoir than locked within the cold stone walls of Black Temple, Vashj maintains a close eye on her minions and personally oversees the draining of Zangarmarsh.