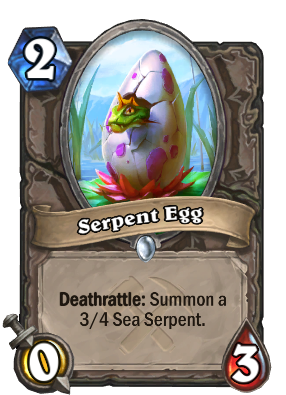 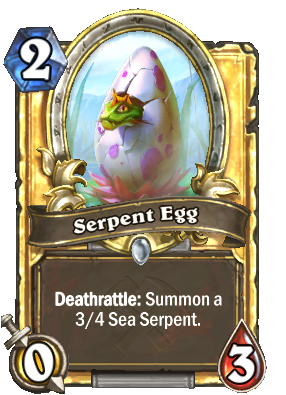 These things go from "adorable danger noodle!" to "MY FACE IS MELTING!" all too quickly.

Serpent Egg is a common neutral minion card, from the Saviors of Uldum set.

Serpent Egg can be obtained through Saviors of Uldum card packs, or through crafting. 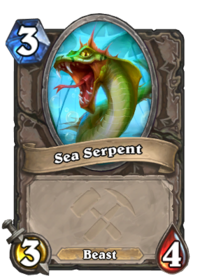 Another egg card that summons a high-statted minion for its cost if used with Deathrattle activators or Attack buffs. Zoo Warlock can also make use of this card as fodder for effects like EVIL Genius. Compared to Scarab Egg, the Sea Serpent summoned by this card is less vulnerable to area-of-effect damage, but the single body is less appealing for token decks compared to three 1/1 Scarabs.

In Wild format, this card is almost strictly worse than Nerubian Egg, and is less efficient than Devilsaur Egg.

Sea serpents are large serpents living in the seas of Azeroth. The sea serpents made their first appearance in World of Warcraft: Cataclysm in the Kelp'thar Forest of Vashj'ir. They shouldn't be confused with the gigantic eels that also roam the areas.

This card is likely specifically meant to represent the Stillwater Slitherer serpents infesting the Vir'naal Lake near Ramkahen in Uldum. Through a series of quests, players help High Priest Amet investigate the menace, eventually discovering that the corruption of the waters is due to the Neferset High Ritualist Zakahn. After slaying Zakahn, players travel to the river's source to kill the source of the serpents' eggs, Scalemother Hevna, in order to cleanse the waters.