This article is using {{Card template}}.
See Help:Style guide/Card for how to edit this kind of article.
Edit this article
Sergeant Sally
41118 • CFM_341
Regular 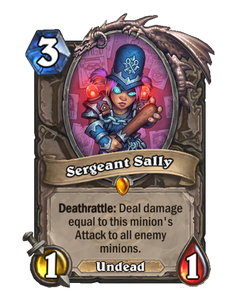 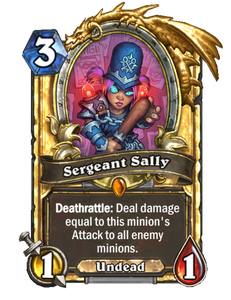 "Who is she? Where did she come from? We don't even have a police force here in Gadgetzan!!" - Mayor Noggenfogger 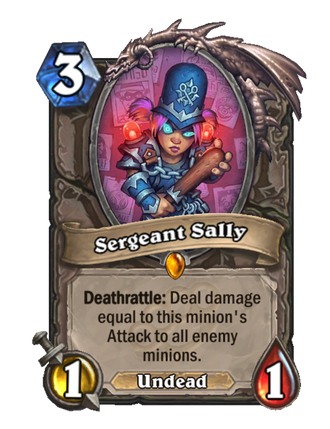 Sergeant Sally is a legendary neutral minion card, from the Mean Streets of Gadgetzan set.

Sergeant Sally has a strong Deathrattle, but as a mere 1/1 for 3 Mana, she is very weak on her own. In wild format, Warlocks can use

Power Overwhelming to use her as a 5-damage

Shadowflame, making it a solid board clear for just 4 Mana. When combined with actually casting

Shadowflame on her, the combined effects of that spell and Sally's Deathrattle will even deal 10 damage to all enemy minions.

Other classes can use the Grimy Goons buffing effects to increase her stats before playing her, or use all the regular methods of buffing a minion on the battlefield. Paladins are especially effective, as they can use cheap Attack buffs like

Blessing of Might to give her Deathrattle more power as well.

Even without buffs, this card can serve as an early game board clear against zoo decks.

Summon
Back in the slammer.

Sergeant Sally is unique to Hearthstone. The following is the description given of her in the video by Six Gamers in which Sally was revealed, and which was created using information directly provided by Blizzard in addition to "a few extra lore touches" by Six Gamers:[1]

"Sally is what one would call 'unconventional', a loose cannon that has given every guard captain she's served under such bouts of severe chronic heartburn, it even makes the Firelord cringe. Unfortunately for law enforcement bureaucrats everywhere, the knee-high bundle of righteous fury that is Sally doesn't even give a second thought to political woes. All that matters to her is justice and results, achieving these by any means necessary. So what if she 'borrowed' heaps of illegal weapons and magic from the evidence locker to get the job done? So what if she caused more damage than the criminal she was chasing? So what if she breaks a few eggs to make some omelets? She gets the job done, doesn't she? This reckless attitude has seen Sally plastered with commendations throughout her career, congratulating her for the crooks she has caught... but among these commendations are almost countless charges of misconduct. Sally is clearly crazy and will often throw herself into what seem unwinnable situations, but this is when she's at her best, relishing any challenge that comes her way. As her Hearthstone card aptly displays, she'd rather be blown up with a

Power Overwhelming than let any of the enemy minions live. Perhaps the strangest thing about Sally, stranger than her burning blue eyes and apparent love for sirens, is that no one really knows where she came from. She just showed up and started dispensing justice. She's not even on the city payroll! She's like a small angry Batman, dishing out her own brand of justice to any criminal unfortunate to be caught in her gaze. While the lawless scum of Gadgetzan mean that Sally's job is never ending, there's no other place she'd rather be, exhilarated by the challenge of cleaning up the streets. All criminals fear her and are quick to run if they catch a glimpse of her shocking pink pigtails or the light emanating from her sirens."

Sally's aforementioned burning blue eyes and the way her armor looks both suggest that she may be a death knight.