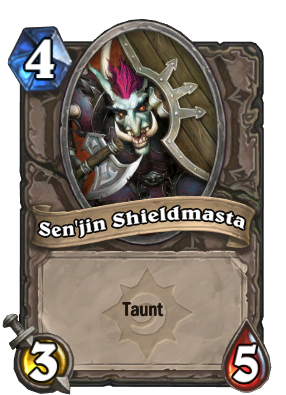 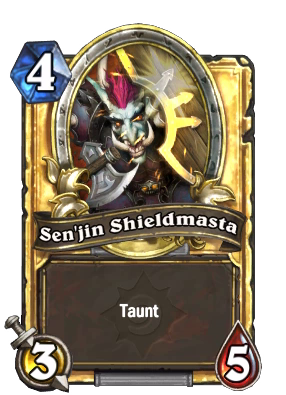 Sen'jin Villiage is nice, if you like trolls and dust.

Sen'jin Shieldmasta is a neutral minion card, inducted into the Legacy set, formerly from the Basic set. 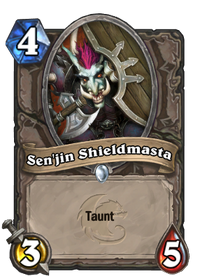 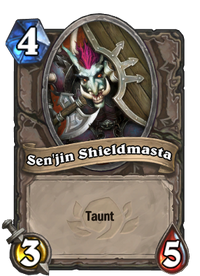 Two copies of regular and golden Sen'jin Shieldmasta are automatically given after the player completes the Ranked's New player experience system, unlocking Wild and Classic format.

Two copies of regular Sen'jin Shieldmasta (Core) are obtained for raising sum of all your class levels to 1.

Two copies of golden Sen'jin Shieldmasta (Core) are obtained for winning 500 games across all classes.

Sen'jin Shieldmasta is a good Taunt minion. This is because the card is equally suited to any deck, and does not require any specific synergy (like Dread Corsair) or board state (like Abomination). The card is of average stats suited to any stage of play, but can have an advantage towards the onset of play. It has a good stat distribution to take advantage of its Taunt ability.

Sen'jin Shieldmasta is a solid choice for newer players, although it will usually be replaced by more powerful upgrades as their collections fill out. Sen'jin is the Taunt-equivalent to Chillwind Yeti, a solid body for a good price that can have a powerful impact on the board especially if played on curve.

Sen'jin was the witch-doctor former leader of the Darkspear Tribe, and father of Vol'jin, former Warchief of the Horde.

There is also a troll settlement named in his honor. Some of the Sen'jin Guardians watching Sen'jin Village carry shields similar to that in the card's image.