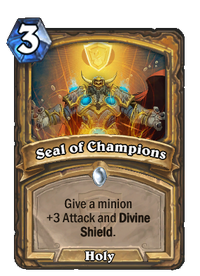 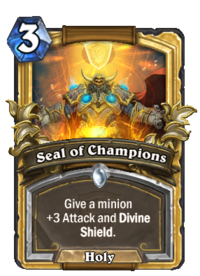 Give a minion +3 Attack and Divine Shield.

Seal of Champions is a common paladin spell card, from the Grand Tournament set.

Seal of Champions can be obtained through The Grand Tournament card packs, or through crafting.

As a Blessing of Might and Hand of Protection rolled into one card this card lets you trade up with your minions, making it very useful for gaining board advantage. It is generally best to use it on a minion that is ready to attack, in order to make use of the effect before the opponent is able to counter it.

Seals are paladin self-buff spells that fill the paladin with Holy Light, causing a variety of effects depending on the choice of Seal, although always related to melee attacks. While a variety of Seals exist in World of Warcraft, Seal of Champions is original to Hearthstone. Seal of Champions is unlike other Seals in that it is used to aid allies (minions) rather than the paladin directly. In this sense it is more like a paladin Blessing such as Blessing of Might and Blessing of Kings.